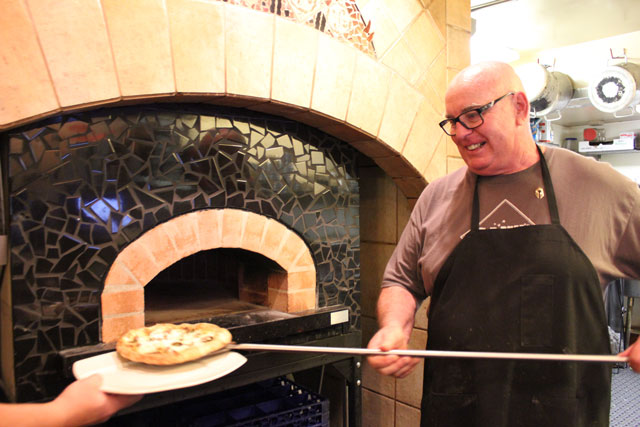 McPhee’s Grill, the Templeton restaurant known for its oak-grilled steaks and thick cut pork chops, is rolling out a new lunch and dinner menu offering beginning this Friday, March 21: wood-fired pizzas from their newest, custom made brick oven. 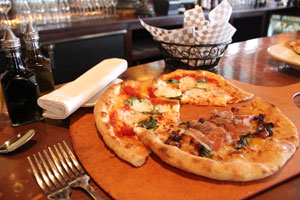 McPhee’s is offering a new selection of wood-fired pizzas.

Chef Ian McPhee says the pizza menu will change and rotate according to the seasons’ fresh and local ingredients. He is also working on various dough recipes, and plans to add homemade breads to the restaurant’s menu offerings soon.

“Making pizza on my own wood-fired oven has been a dream and a passion of mine since my wife and I opened the restaurant 20 years ago,” he says of the recently installed, custom-built brick pizza oven. “Pizzas have always been on my menu but I was never 100 percent happy with them. A proper wood-fired oven like ours allows us to cook on a much hotter surface (600-800 degrees Fahrenheit, or more), which results in a better pizza crust—crispy texture on the outside and a nice chewiness on the inside.”

Hand-built by native Italian Giuseppe Crisa at Forno Classico in Santa Barbara, McPhee’s custom-made brick oven reflects the Italian tradition of wood-fired Napoletana pizza ovens. Using only local oak for fuel and reaching temperatures up to 1200 degrees Fahrenheit, the oven can cook pizza in less than one minute, which McPhee says, gives the pizza a “lightness” that is not found in slow-cooked pizzas made in a conventional gas oven.

With the hope of making it easier and more affordable for everyone to dine at McPhee’s Grill, McPhee says the pizzas range in price from $12- $15. “We want everybody to come in and dine with us, and feel comfortable –they don’t have to order a steak, just come in and enjoy a pizza and a glass of wine, or just appetizers – that’s fine too.”

Owned and operated by chef-pastry chef, husband-wife team Ian and June McPhee, McPhee’s Grill has been featured in Sunset Magazine and Westways Magazine and has been serving Templeton and the greater North San Luis Obispo County, CA area since 1994. McPhee’s Grill offers fine wine and fine dining, with a seasonal menu that showcases the bounty of fresh, local produce, meat and fish grown, raised and caught on the fertile Central Coast.