Michael Franti and his band in town Aug. 14 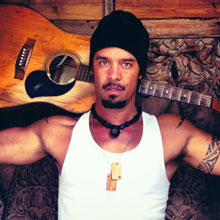 Platinum recording artist Michael Franti and his band Spearhead will kick off the first leg of their “All People Tour” on September 4th in Milwaukee, Wisconsin. But before the tour, they will be in Paso Robles at the new Vina Robles Amphitheater on Aug. 14, 2013.

The 24-city North American run, and select concerts this summer, in support of his July 30th album release All People, includes performances in Philadelphia, Boston, New York and San Francisco, as well as Canada, before the leg concludes on October 12th in Los Angeles. Tickets are on sale as of June 14th.

Franti and Spearhead have earned a reputation as one of the most electrically charged and ultimately unforgettable live performers in the business. They’ve shared the stage with the likes of U2, John Mayer, Carlos Santana and will this summer with Train, on select dates. From “Everyone Deserves Music” to “I Know I’m Not Alone”, his 2008 breakout smash “Say Hey (I Love You)”, 2011’s “Sound Of Sunshine” and his current single the anthemic celebration of life, “I’m Alive (Life Sounds Like)”, Franti and Spearhead are a concert experience not to be missed.

“We are super excited to get back on the road this summer and fall,” said Franti. “Our new album All People is officially in the can and we are stoked to get out there and play all the new songs for you. Be ready for some surprises and ready to rock out. See ya in the parking lot, see ya on the street, see ya on stage!!!”

All People, to be released on July 30th, follows 2010’s The Sound Of Sunshine, which was the highest Billboard Top 200 Album Chart debut of Franti’s career. The recently released first single “I’m Alive (Life Sounds Like)” has already made its way into the Top 5 on the AAA chart, marking Franti’s fourth Top 10. Franti will be out on the road this summer playing select dates with Train.

For more official news, a full list of tour dates and ticket information go to www.michaelfranti.com.