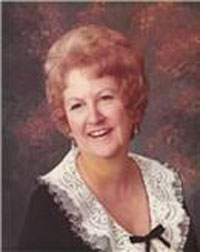 Miriam passed away peacefully on June 25, 2014 at the age of 87, on what was her and her beloved husband’s 65th wedding anniversary, due to complications of a debilitating stroke.

Born July 1, 1926 in Globe, AZ to Bernard C. Brewster, a Methodist minister, and his wife Teressa, Miriam was the youngest of four daughters and moved quite often, migrating to Southern California when she was a toddler, where she grew up and attended primary schools.

Miriam and Neil met in college at San Jose State University, where she graduated with a BA in Education. After a few years of residing and teaching Kindergarten in Paso Robles, a career opportunity in 1955 brought them to Carmel where they resided for 59 years.

Additional to greatly enjoying spending as much time with her granddaughters as possible, Miriam’s interests and activities included following and being involved politically, traveling with friends, supporting charities and causes she believed in, caring for her many cats over the years and being a member of the Mayflower Society.

Miriam’s sweet, gentle and charitable nature will be missed by all who were fortunate to know her. Family and friends are welcome to honor Miriam in a Celebration of Her Life on Saturday, August 9, 2014 from Noon to 3:00pm at theCorral de Tierra Villa’s Clubhouse, 23799 Monterey-Salinas Hwy., Salinas. In lieu of flowers, the family is requesting that donations be made in Miriam’s name to her favorite charity, The SPCA for Monterey County.