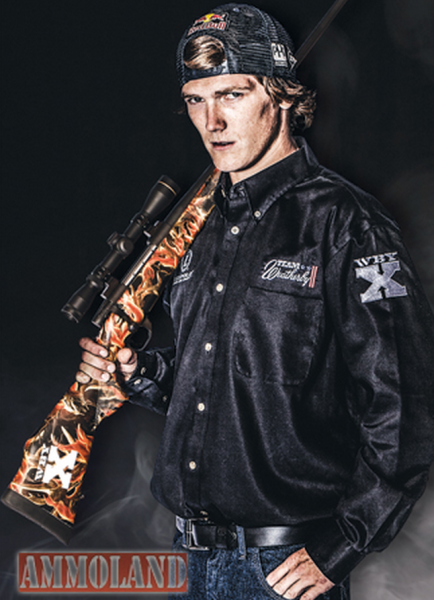 The 2012 American Motorcyclist Association (AMA) Pro Motocross Rookie of the Year, Nelson rides for the Troy Lee Designs/Lucas Oil/Honda team. He put together some impressive performances during the 2013 Monster Energy AMA Supercross West Lites season, showing great speed and promise for the future despite having to sit out the last three races due to injury.

In 2012, Nelson finished ninth overall in the AMA Pro Motocross Lites series – a strong showing for his rookie season. The Templeton, Calif., resident began racing in 1991.

An avid hunter and outdoorsman, Nelson grew up hunting with his family and using Weatherby products. He especially enjoys hunting wild pig.

“We are excited to announce Jessy Nelson as a new member of Team Weatherby,” said Mike Schwiebert, director of marketing for Weatherby, Inc. “At a young age, Jessy has worked hard to be successful in a very challenging sport. He is an outstanding representative of motocross and as a hunter and fan of our firearms, will be a great spokesperson for Weatherby.”

Nelson commented, “I’m very excited to be partnering with Weatherby. I’ve always been a loyal user of their products and I’m honored to be able to work with the brand professionally. I’m looking forwarding to growing our relationship in the years to come.”

Founded in 1945, Weatherby, Inc.’s line features the new WBY-X products as well as the popular Vanguard Series 2 and legendary Mark V rifles (production and custom), Threat Response shotguns and rifles, semi-auto and pump shotguns, premium ammunition and security/shooting accessories. For more information, visit www.weatherby.com. The company is based in Paso Robles, Calif., and invites all hunters and shooters to visit and join its free online community at www.weatherbynation.com.