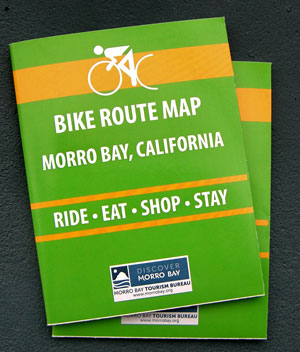 Like many newcomers, when Barry Rands first arrived on the Central Coast, he was delighted to find a wealth of great bicycle routes. But the discovery was by trial and error.

“I discovered Morro Bay’s bike paths by chance,” said Rands, who is now an associate engineer with the city’s Public Services Department. “Because they were hard to find, they were a really well-kept secret.”

Now the secret is out. Through a combined effort with the Morro Bay Tourism Bureau and the San Luis Obispo Bicycle Club, the City of Morro Bay has a new Bike Route Map. The free map is available at several locations throughout the city, or it can soon be downloaded from the city’s website: www.morro-bay.ca.us.

The map shows detailed routes for biking within the city and marks public restrooms, bikes shops and other places of interest to cyclists. It also directs riders to regional routes around the Central Coast, from Cayucos to Los Osos and inland toward San Luis Obispo.

“For those more adventurous riders, it includes some outlying routes through the countryside, and some elevation and climbing routes as well,” Rands said.

He said biking enthusiasts have wanted a Morro Bay bike map for years, but without available funding, the plan was shelved. Recently, with financial support from the Morro Bay Tourism Bureau and the San Luis Obispo Bicycle Club, the map became a reality.

Helping to spearhead the project was Robert Davis, chairman of the Morro Bay Citizens Bike Committee and past president of the San Luis Obispo Bicycle Club. Both groups aim to encourage and support safe biking.

“We love this type of project,” Davis said. “It fits exactly with the bike club’s mission.” He noted that the new map also demonstrates what can be achieved through successful partnership.

“It’s an excellent example of nonprofits and government working together for the public,” he said.