A new chef and fresh inspiration at Thomas Hill Organics 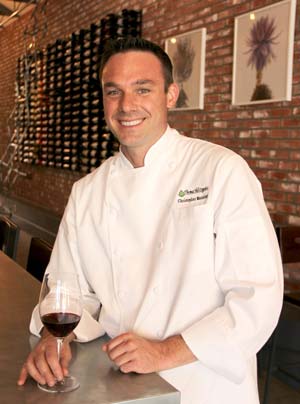 “Thomas Hill is the kind of restaurant every chef hopes to work in,” said Manning. “Elegant and approachable, creating a warm carnival for the senses with fresh, local ingredients.”

Manning caught owner Debbie Thomas’ attention with his work as executive chef at étoile Restaurant at Domaine Chandon and Peju Winery, both in Napa Valley.

“Chef Manning’s background in wine country dining is second-to-none,” said Thomas. “Partnering with him is a win-win because he shares our appreciation for fresh, regional ingredients, creatively prepared.”

A native of Montana, Manning exhibited a passion for cooking at an early age, creating dishes for his family as an after school hobby. Throughout high school, he worked in the kitchen of the Montana Grill, a local favorite eatery, and ultimately decided to pursue a serious career in food.

When his culinary arts professor, chef Mark Hogan at Flathead Valley Community College, saw Manning’s potential, he invited the young chef on a culinary excursion through Europe where they dined at distinguished restaurants and attended classes at the famed Le Cordon Bleu schools in Paris, London and Florence. This worldly immersion dramatically transformed Manning’s view of food and cooking as he became fascinated with new ingredients and techniques.

In 2000, Manning earned a degree from San Francisco’s prestigious California Culinary Academy and worked under acclaimed chef Laurent Manrique at Campton Place Restaurant. And, as often happens, love for all things food led to a love for all things wine, eventually leading him to the Napa Valley where he could fully explore the interplay between food and wine.

Cooking at étoile, Manning’s talent and creativity in the kitchen led to the restaurant being named “the ultimate Napa Valley dining experience” by the Press-Democrat, and paved the way for its Michelin star rating. It was during this time that Manning was sent to Moët & Chandon in Epernay, France, to further refine his culinary skills under legendary Chefs Pascal Tingaud and Bernard Dance. Soon thereafter, he was invited to host a dinner at the prestigious James Beard House in New York City, in addition to creating and executing a private dinner party for 12 people that raised over $91,000 for charities in Bethesda, Maryland.

Since his appointment at Thomas Hill Organics, Manning has already started to incorporate his own signature on the menu. In terms of style, his cuisine adapts to the seasons with a blend of classical French tradition and avant-garde creativity – a style that is very much in-line with that of Thomas Hill. “With the season about to change, this is an opportune time to switch things up. My creativity materializes from what I have in front of me; inspiration comes from which ingredients are available to me in the moment.”

“Joining with Debbie and her team is great because they’re really passionate about sustainability and farm-to-table dining,” he added. “They get that, ultimately, it’s about having fun and making beautiful food.”