Youth art to be displayed in downtown Paso Robles 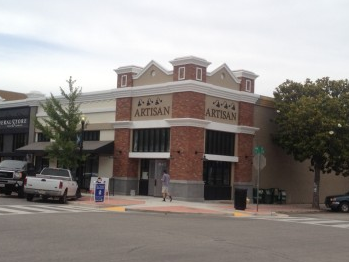 An exciting new series of public art works begins July 27, 2013 in downtown Paso Robles featuring original works by local youth artists. A dedication ceremony at Studios on the Park, at 1130 Pine St., starts at 6 p.m. followed by a public viewing of the series’ inaugural installation at Artisan restaurant, located across the street.

The series is being supported by a partnership between Studios on the Park, Artisan restaurant owners Mike and Chris Kobayashi, and local property developer Nick Tompkins, who recently spearheaded redevelopment of the old A&R Furniture Building that now houses Artisan.

The new series will feature youth-driven art works presented in large scale format on the east-facing wall of the new Artisan location running along Pine Street near the corner of 12th Street. Works will change periodically several times over the coming year to showcase the talents and creative visions of local teen and young adult painters.

According to Artisan co-owner Mike Kobayashi, “the project will help to liven up the downtown with appealing visual images that speak to the unique experiences of our youth” and is intended “both to celebrate the local community, as well as inspire public discussion and understanding of important social issues.”

The first entry in the new series will feature a work entitled “Bryan Inspired,” which remembers one of the Artists Re-Imagining Color group’s early members, Bryan Brady. Brady was tragically found dead on the railroad tracks behind a downtown bar the morning following his 21st birthday in 2010. The cause of his death is still unresolved.

According to Don Brady, Bryan’s father and chief winemaker at Robert Hall Winery, “Bryan was a curious and positive young man who loved creativity and people. This public recognition of his memory will hopefully help people to recall the strength of his spirit and also reflect seriously on the safety and fragility of our youth.”

Brady along with his wife Kasi and daughter Laura has been generously supportive of the project through both direct financial contributions to facilitate its completion as well as a partnership with a volunteer group called Friends of Bryan Brady led by Rodi Bragg, a family friend, which has also generated financial support to commence the Artisan series.

Other contributors and supporters include The Blueprinter, The Art Works, Process Design Services Group, the City of Paso Robles, the Downtown Main Street Association and NKT Commercial.

Tompkins, the building developer and owner of the facility where the new art series will be featured says the project offers “a unique opportunity to combine local youth talent, civic culture, community celebration and commerce” in a unified effort to advance the common good. Tompkins’ company has contributed essential support for the project through the purchase and installation of a wall exhibit system and state of the art LCD lighting that will enable the featured art to be appreciated by local passersby both day and night.

Henry A. J. Ramos, a former board member of Studios on the Park who serves on the California Community Colleges Board of Governors led the effort to commence this series following other successful efforts to feature contributing youth artists’ public art works under the name Artists Re-Imagining Color. The group has worked in close partnership with Studios on the Park—which has supported the Group through a series of dedicated exhibits and the Regional Transit Authority— which through its Youth Art in Action Program is featuring original art by group members on select bus routes all across the County.

According to Ramos, “this additional contribution to the local art scene is another important investment in Paso Robles’ future as a center of creative culture and economy on the Central Coast.” Ramos sees the town’s support of such projects, along with Studios on the Park’s allied programs as increasingly central anchors in Paso Robles’ social and economic future. “Such efforts,” he says, “will help to magnetize creative talent and investment from other places in California and elsewhere in ways that are important to our region’s long term vitality.”

Jacob Scotti, a 20 year old leader of Artists Re-Imagining Color says his involvement in the group and the project have inspired him to make art a more central part of his future life and career plans. According to Scotti, “programs that both inspire and create new leadership, networking and even job opportunities are hard to find for young people these days. I feel fortunate to be a part of something like this. It is helping to open doors for me that I never anticipated but certainly now appreciate.”