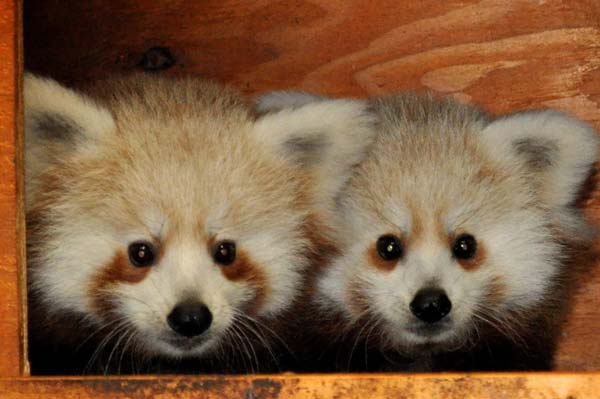 The City of Atascadero and the Charles Paddock Zoo announced today the arrival of two new Red Panda cubs at the zoo.

The cubs were born at the zoo on June 26, but have been kept under wraps until zoo staff could be more comfortable with their safety and survival, the city said in a press release. Both of the new cubs are females, they haven’t been named yet. They were born to mom-panda Damini who was born in 2011, and dad-panda Ruskan, born in 2009. Both mom and dad were born in other accredited zoos participating in a red panda breeding program.

The young cubs are now reaching a critical milestone as they start weaning from their mom and begin eating solid food. Zoo staff will continue to closely monitor their weight to be sure that they successfully make the transition to solids. The little cubs are beginning to venture out of their nest box on their own now, and so should start appearing in the exhibit for public enjoyment very soon.

The new panda babies will stay at the Charles Paddock Zoo for approximately a year and then will be assigned to other zoos in order to continue the ongoing red panda breeding program which is designed to save this unique species from extinction.

Red pandas are small, tree-dwelling mammals native to the eastern Himalayas and southwestern China. Their wild population is estimated at less than 10,000 mature animals, according to the International Union for Conservation of Nature. The population continues to decline and is threatened by habitat loss and fragmentation, poaching, and inbreeding depression, although red pandas are protected by national laws in their range countries.

It is slightly larger than a domestic cat. It has reddish-brown fur, a long, shaggy tail, and a waddling gait due to its shorter front legs. It feeds mainly on bamboo, but is omnivorous and also eats eggs, birds, insects, and small mammals. It is a solitary animal, mainly active from dusk to dawn, and is largely sedentary during the day.