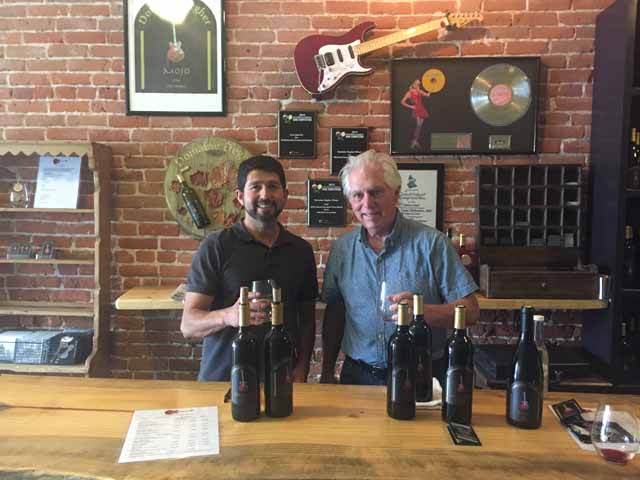 Degher and Biggs co-wrote “I Drank Everywhere,” which is loosely based on a Johnny Cash song, Degher said. The duo made a music video of the song, which gives homage to Paso Robles Wine Country.

Degher has been a musician since he was 11 years old and a winemaker since 2004, after he bought property and moved to Paso Robles.

“In the late ’90s I saw the writing on the wall with digital recordings,” Degher said on why he decided to leave the recording business to pursue winemaking.

He worked as a recording engineer and producer. He owned his own business, Red Zones Studios, in Santa Monica for 16 years. He was in the music recording business for more than 30 years, getting his start after he went into a small studio on Sunset Boulevard to record some tracks. He was asked if he ever considered becoming a recording engineer. He quickly said no and went on his way. However, a few weeks later, he called the studio up and asked if they were still looking for an intern. He then started learning the ropes, which led him to his career.

While he worked as a recording engineer and producer, he continued to make his own music. He recorded his own albums and still performs today. His albums are for sale alongside his wines in the tasting room.

Denis Degher pours a taste of wine in his new tasting room in downtown Paso Robles. Photo by Heather Young.

Degher decided to purchase property in the Paso Robles area on San Marcos Road when he knew it was time to get out of the recording business, and out of Southern California. He’d been visiting the area for a while, so he was familiar with the area, and said he loved it. While he thought he might grow grapes or make wine, he wasn’t sure because he hadn’t done it before.

“I fell in with two guys – Marc Goldberg of Windward Cellars and Stephan Asseo of L’Aventure, and they basically mentored me in 2004 and 2005,” Degher said.

His winery specializes in Rhone varietals and cabernet made in a French style. He uses the grapes from his property of head-trained vines on four acres. His wine is not exclusively made from the grapes he grows, though. He recently added two white wines to his list: a chardonnay from Santa Barbara and Blanche, which is from Willow Creek vineyard and is two-thirds viognier and one-third roussanne.

The wine tasting room is open Tuesday through Sunday from noon to 7 p.m., which later hours on Saturday and Sunday nights.

“It’s been surprisingly good since we’ve been open 35 days,” Degher said, adding that part of the success is that he and Torres make different wines in different styles. Torres focuses on Spanish varietals.