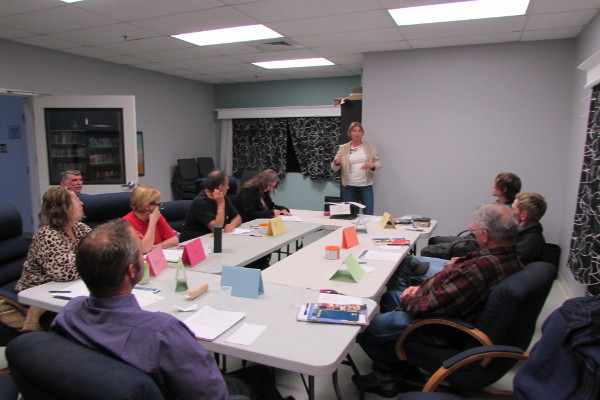 –A new Toastmasters International group is looking for members. The group meets Wednesday evenings in Templeton. Toastmaster Jolly Roger Holman, who organized the new club, said the club needs at least eight more members to get its charter. “We have twelve members now. Our membership represents everyone from new speakers starting out to people who have been with Toastmasters for a long time.” Toastmasters International, with clubs around the world, helps people become more effective communicators and leaders.

At Wednesday night’s meeting of the Life Community Toastmasters Club, members introduced themselves by giving a short two to three minute speech about why they joined Toastmasters. Heidi McLenithan said her goal is to learn the daily language differences between American English, Oxford English and German. “In Germany we learn Oxford English but its not as interchangeable with American English as you think. I’ve been here for twelve years now, raising two kids and very involved in their schools and volunteer work and I still hear words that are new to me.” McLenithan said her confidence with her language skills is already improving from attending the Toastmasters meetings. “It’s a supportive place to learn.”

Other Toastmasters clubs nearby:

Toastmaster International has more than 332,000 members worldwide in 15,400 clubs in 135 countries. Members improve their speaking and leadership skills by completing speaking projects, which include constructively evaluating other speakers.