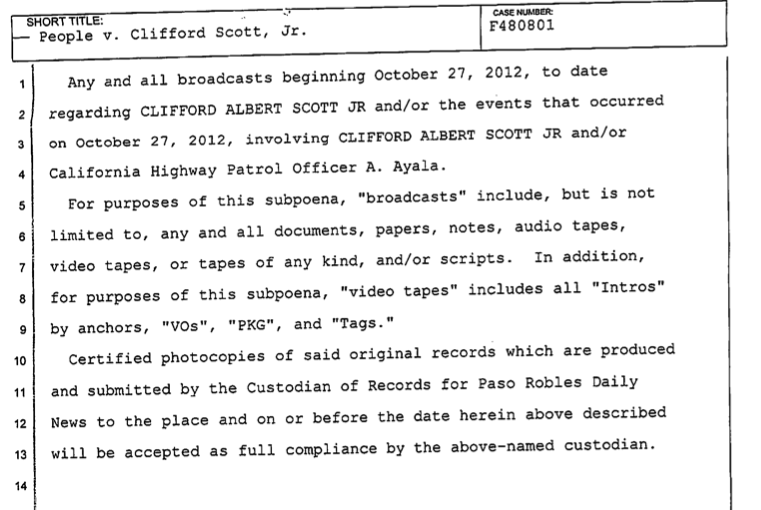 Update: Paso Robles Daily News Editor Scott Brennan filed an objection April 26, 2013 to the subpoena from the public defender’s office and refused to comply with the order to produce news reporting records.

The public defender’s office served this website a subpoena for news records related to the attempted murder case against Clifford Albert Scott. He is accused of shooting CHP officer A. Ayala and is awaiting trial.

The legal filing by attorney Linden Mackaoui orders this news blog to produce “all documents, papers, notes. audio tapes, video tapes, or tapes of any kind, and/or scripts,” according to the subpoena. The order sets a court hearing date of April 26.

“In my 15 years in media and journalism I’ve never received a subpoena for records,” says editor Scott Brennan. “Public officials usually respect the First Amendment’s protection of speech and decline to serve news organizations. I am especially surprised because there are no records other than what is publicly available online.” Brennan said he has not decided how he will respond to the subpoena.

The Paso Robles Daily News website published a story and updates about Clifford Albert Scott on Oct. 27. 2012. A CHP officer and Clifford Albert Scott reportedly shot at each other early that Saturday morning when a high speed chase ended in a car accident at 13th and Spring streets in Paso Robles. The suspect is next expected to appear in court on June 18 a readiness conference. The trial date is set for June 24.

Investigator Binford told the Paso Robles Daily News that the public defender is seeking stories from local media to aid in the defense team’s strategy.