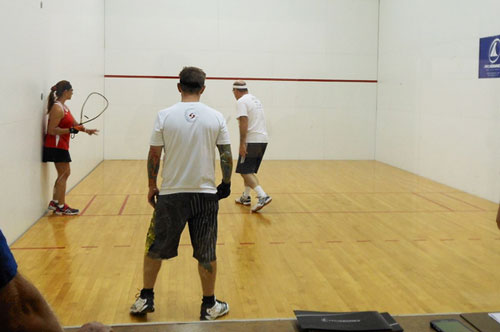 The tournament is a one-day Shootout with a casual format that starts at 8 a.m. and finishes around 1 p.m. for the men’s and women’s beginner, intermediate & junior players. The advanced and open level players then take the courts and usually finish up around 6 pm.

“It’s a great way to meet other racquetball players,” he says. “Racquetball is fun cardio fitness at any skill level and is easy to learn.” Champions offers free racquetball lessons with no charge for loaned equipment, including racquets, eyewear, and racquet balls.

Champions welcomes the viewing public to come out and watch the top-level players show off their skills, as well as the other divisions. Local tournament sponsors have supported the shootout with food, smoothies, tournament tee shirts, awards and raffle prizes. Sponsors include Prokennex, SESLOC, Western Janitor Supply, Coastal Community Builders, Subway, and Harvest Natural Foods.

Where to play racquetball in North County