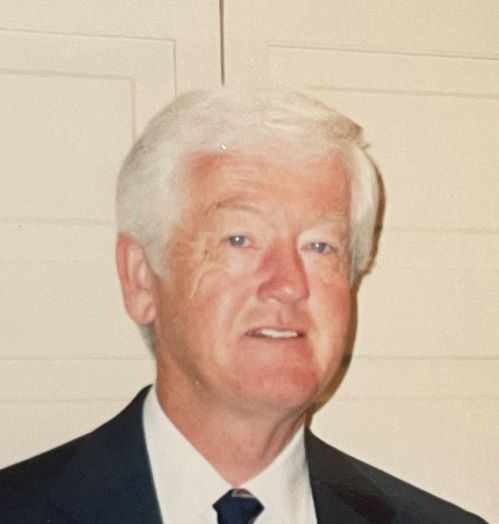 Mike was born on January 4, 1935, in Seattle, Washington, to the late Cyril and Isobel Ronan, in modest circumstances. He and his brother, Ray, developed strong work ethic by selling newspapers and working as golf caddies while still in grade school.

Mike graduated from O’Dea High in 1953; while he enjoyed school, where he really thrived was on the basketball court, winning championships as early as his freshman year. After graduation, he spent a brief time at Seattle University before joining the army, where he was stationed in California. After his discharge, he went back to Seattle University and was proud to be the first in his family to graduate from college. During that time, he met Anne McCullom on a blind date. They quickly fell in love, married, and had two children while Mike was finishing his studies. After Mike graduated with a business degree, the family moved to Mike’s beloved San Francisco, where he started working for Fireman’s Fund Insurance. Another son was born there before Mike was transferred to Albuquerque, New Mexico, where their fourth child was born. Career success continued and Mike was happily transferred back to California, where Mike and Anne had their fifth and sixth children.

In 1969 Mike was given an opportunity to partner with James “Don” McDougall, Giff Sobey, and Ben Holsted as an insurance agent running an office in Morro Bay, California. There he and Anne continued to raise their six kids. While busy building his business, Mike always found time to attend every sporting event, music concert, and religious ceremony his kids were involved in. The family shared many wonderful vacations, often returning to see family in Seattle. Mike and Anne also found time to travel to many exciting places, their favorites being the Bahamas, Hong Kong, and Hawaii.

While Mike always made time for his family, you could find him on the golf course every Wednesday afternoon; perfecting his lawn every Saturday morning; and sitting on the family room floor, enjoying a salami and cheese sandwich, while watching sports every Sunday at noon.

In 1979 Mike left Morro Bay to join his business partners in Paso Robles, and it was in Paso Robles that Mike and Anne built their dream home. Anne passed away suddenly in 1982. Some years later Mike met Terry Miller, marrying her in 1991. As Mike’s children went off to college, married, and had their own children, he and Terry spent many wonderful years traveling the world. They spent time in Europe and Japan and went on two memorable African safaris. Always adventurous, Mike learned how to ski later in life and spent many weekends with friends and family on the slopes. He loved that he was able to ski with his kids and grandkids, go river rafting, and drive around a race track at incredible speeds.

Mike was a man of deep faith, with an unwavering commitment to his community. He was an active member of the Catholic churches at both St. Timothy’s in Morro Bay and St. Rose in Paso Robles. He was well respected as the president of both Morro Bay’s Lion’s Club and its Chamber of Commerce, and he was an energetic member of the Rotary Club of Paso Robles. But Mike’s proudest achievement was that all six of his children graduated from college.

Mike is survived by Tressa (Miller) Ronan of Paso Robles; Julie Ronan of Paso Robles; by Julie’s children, Maryn Brown and Erin Newman; by Michael A. Ronan (and his wife Maha Matta) of San Francisco; by Tim Ronan (and his wife Doris Ronan) of San Jose; by Linda Ronan of Austin, Tex.; by Linda’s children, Miles, Nik, and Cyril Mermer; by Kelly Ronan of Seattle, Wash.; by Brian Ronan (and his wife Heather Ronan) of Bakersfield; by Brian’s children, Adam, Patrick, and Catherine Ronan; by three great-grandchildren, Kooper, Harlow, and Diego; by many nieces and nephews; and by his stepdaughter Linda Menigoz (and her family). He was preceded in death by his wife Anne, his parents Cyril and Isobel, his brother Ray, and his sisters June and Donna.

Family and friends will be gathering directly after the service at the Ronan family home. A light lunch will be available.

In lieu of flowers, memorial contributions may be made to the Paso Robles 4A Foundation. Visit https://sites.google.com/pasoschools.org/4afoundation/home?authuser=0 for more information