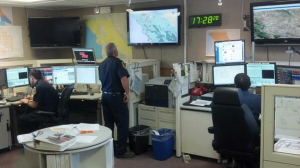 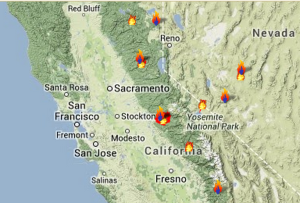 The Cal Fire Emergency Command Center has deployed over 100 firefighters from San Luis County to fires in California. Fires are currently burning in Yosemite, Los Molinos in Tehama County, Georgetown in Eldorado County and other places.

The Yosemite Rim Fire, one of the state’s largest fires in recent history, is 7-percent contained as of this morning. It has burned more than 125,000 acres and is threatening San Francisco’s power supply. It started eight days ago in a remote canyon of the Stanislaus National Forest.

The fast-moving fire moved through Yosemite’s wilderness all of last week. It has doubled in size since Thursday, forcing evacuations, shutting down the main highway to the national park, and damaging the Hetch Hetchy water and power system.

Over 2,600 firefighters were on the blaze this weekend. They are assisted by bulldozers and firefighting aircraft.