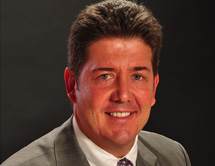 Paul Sloan, director of sales and marketing at Visit San Luis Obispo County, will be leaving the local tourism bureau to accept a position as the CEO of Tahiti Tourism worldwide, Visit SLO County reports today.

In his new role, Sloan will manage 45 staff at the Tahiti Tourism head office in Tahiti and oversee the organization’s 12 international offices in France, Italy, Germany, UK, Spain, Australia, New Zealand, Japan, S. Korea, China, Chile, and the USA, with new offices opening in Brazil and Russia in 2015. One of Sloan’s immediate responsibilities will be overseeing the roll out of the destination’s new global brand across all markets.

A native son of Paso Robles and member of the Paso Robles Rotary Club, Sloan says he has greatly enjoyed his time with VSLOC working to develop the county’s tourism. “We wish him the best of luck in this new phase of his career,” the tourism bureau says in its announcement.

Sloan has previous experience working in the Tahiti tourism industry. He lived there from 1998 to 2009 working in various tourism-related positions.