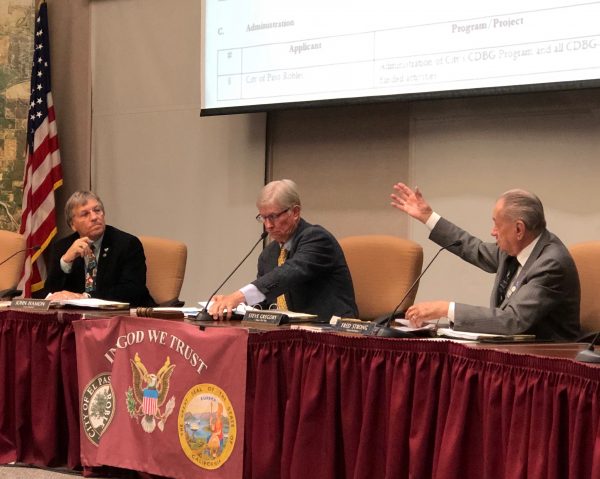 Highlights from the Paso Robles City Council meeting on Tuesday, Dec. 17, 2019 are as follows.

Received a Capital Projects Update. Work is underway on Spring St. from 24th to 36th Streets. Utility work is complete, and this week contractors started permanently repairing the trench. Next summer that portion of Spring St. will be fully repaved. Construction of the Main West Water Tank on 21st Street continues. Contractors began pouring concrete on the tank floor last week and that work will be completed this week; the floor is 144 feet wide.

Discussed the Draft Action Plan for the Community Development Block Grant (CDBG). The city receives its allocations of federal CDBG funds through the County of San Luis Obispo. The county prepares an annual Action Plan, which HUD approves following adoption by the County Board of Supervisors. Under a cooperation agreement with the county, the city retains the right to decide how its allocation of CDBG funds will be used. City Council can review all applications and forward to the San Luis Obispo County Board of Supervisors those to be included in the Annual Action Plan as being recommended for funding. Council provided direction to recommend funding for the following in the Draft Action Plan: $26,000 to GRID Alternatives for Anna’s House solar project, $32,750 to GRID Alternatives for a Solar Job Training program, $94,770 for 17th Street pedestrian improvements, $13,700 for CAPSLO’s Senior Day Care Program, $3,000 to the Food Bank for food for the homeless, $18,728 for El Camino Homeless Organization, and $47,237 for administration ($30,704 of the administrative funds are allocated to the County for program administration). The final Annual Action Plan will be considered by the council at a public hearing on March 3, 2020.

Received the Comprehensive Annual Financial Report (CAFR) for FY 2018-19. The CAFR is a set of financial statements comprising the financial report card for the city. It is prepared in accordance with generally accepted accounting procedures (GAAP), including compliance with pronouncements issued by the Governmental Accounting Standards Board (GASB). An audit of the city’s financial records was performed by the outside certified public accounting firm, Brown Armstrong Certified Public Accountants. The independent auditors issued an unqualified opinion, meaning that the financial statements and other information reported in the CAFR fairly represent, in all material respects, the financial position of the city as of June 30, 2019 and the financial activities beginning on July 1, 2018 and ending on June 30, 2019. The CAFR is available at https://www.prcity.com/ArchiveCenter/ViewFile/Item/891.

Provided Direction on the Biennial Budget Process. Council directed staff to design and conduct a budget development and adoption approach for fiscal year (FY) 2020-21 and FY 2021-22 that fully addresses the city’s long-term fiscal realities and develops solutions that can start to be implemented in the next biennial budget. The process will build on the city’s 10-year General Fund forecast by ensuring adequate preparation for the city’s fiscal future and taking the steps to secure long-term fiscal stability. The budget process will kick off with a public workshop on Saturday, Jan. 25, 2020, continue with council/community workshops in February and March, an update of the Fiscal Policy in April, budget review in May, and budget adoption in June.

This represents just a subset of the total actions by the council. The full agenda can be found at https://www.prcity.com/agendacenter and the audio from the meeting can be found at https://www.prcity.com/AgendaCenter/City-Council-2. The minutes will be available as part of the packet for the City Council’s next regular meeting, which takes place on Tuesday, Jan. 7, 2020 at 6:30 p.m. in the Library Conference Center/Council Chamber at 1000 Spring Street.