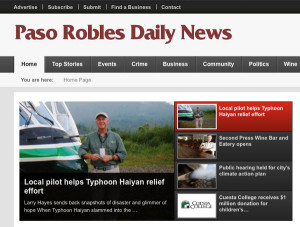 The Paso Robles Daily News received word from the Google News support team that its general news articles will be included in Google News search results effective immediately. “We’ve reviewed and added your site to Google News,” the support team wrote after more than a month of review.

“This is huge news for us,” says Scott Brennan, editor of the Paso Robles Daily News. “While our stories have appeared in generic Google searches for over a year now, being included in the exclusive Google News search is a big deal,” he says.

It means that online users who search for news, or have Google email alerts set up will see stories from Paso Robles Daily News right alongside other local news providers like The San Luis Obispo Tribune, KSBY, KCOY, Paso Robles Press and others, Brennan says.

For an example of the search results, click here: Google News.

Brennan, CEO of Access Publishing, started the Paso Robles Daily News in 2012 with the goal of being the most comprehensive news source for Paso Robles.

“We started it to provide a free outlet for local news from police, fire, government agencies, businesses, and organizations,” he says. “Over the past year we’ve seen much success,” Brennan says. Here are some statistics he provided: