Speaking at the Pavilion on the Lake in Atascadero Thornberg told local chamber of commerce members that the national, state and local economies are improving. His firm, Beacon Economics, studies the local economy and makes regular reports to business leaders.

Highlights of the economic report

More jobs
The unemployment rate in San Luis Obispo county is the best it’s been in years, hovering around 6.5-percent. 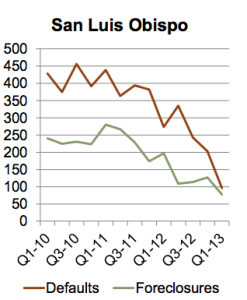 Foreclosures down
Defaults and foreclosures in the county from a high in 2010 of over 650 units per quarter to less than 200.

Population growing
Paso Robles’ 2012 population is at 30,227 and growing at a healthy 1-percent, the best rate in San Luis Obispo County.

Wine industry
Wine grape production is up and so are the prices per ton, with a county crop value of $197 million. The strength is due in part to California wine exports that have doubled in 10 years.

Tourism
Hotel occupancy in the county has been climbing for three years and was at 70-percent in January with an average daily rate of $120.

More than 100 people attended the annual event. It was held Thursday, June 6,  and was hosted by the Atascadero and Paso Robles chambers of commerce. The event’s major sponsor wasPacific Gas and Electric. Mission Community Bank sponsored the breakfast. Other speakers included Linda Hendy, Maggie Cox, Gordon Bosserman and Jim Anderson.