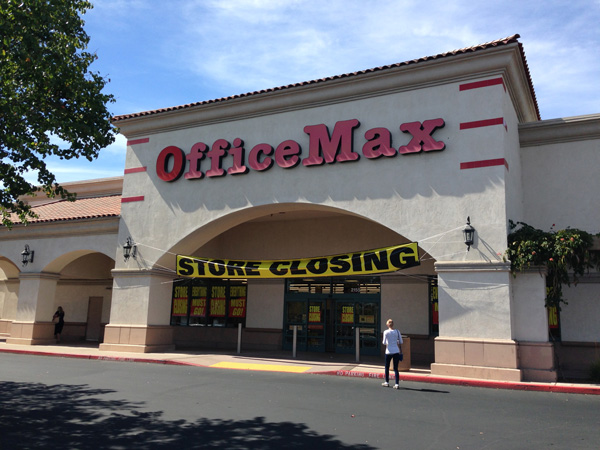 A large banner in front of OfficeMax announces “Store Closing.”

The Paso Robles OfficeMax on 2155 Theatre Drive near Target is closing, a banner outside the store says. The closing date is sometime in November, according to a store employee.

Move store closing comes after a buy out from a larger competitor. Office Depot, the nation’s second largest office supply store after Staples, offered to buy the OfficeMax chain of stores for $976 million in February. OfficeMax shareholders approved the deal in June.

The buy out of OfficeMax came at a time when office supply retailers, often seen as a barometer of economic health, have suffered as demand for their products fell during the long-running U.S. recession. Office supply stores are facing strong competition from Amazon.com Inc and Wal-Mart in selling everything from pens and notebooks to furniture to government, businesses and consumers.

Analysts predicted store closings were to be expected. Approximately 20 stores are now expected to close. OfficeMax employs more than 29,000 employees in more than 900 retail locations throughout the U.S.