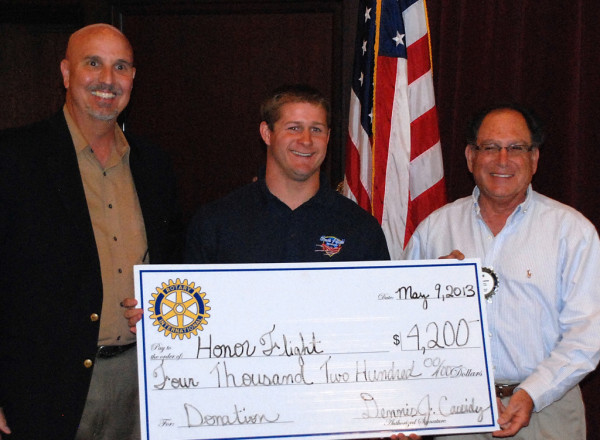 Honor Flights will take veterans to memorials in Washington, DC

The Rotary Club of Paso Robles, a group of local business people dedicated to charitable causes, donated $4,200 to Honor Flight at its meeting last week. Honor Flight provides all-expense trips to the World War II Memorial in Washington DC for WWII and other veterans. The Rotary check will fund two veterans and one escort for this deeply emotional journey on the next scheduled trip in late summer . The funds were raised from individual donations of $100 from members of the club.

An Honor Flight is conducted by non-profit organizations dedicated to transporting as many United States military veterans as possible to see the memorials of the respective wars they fought in in Washington, D.C. at no cost to the veterans.

Currently these organizations are focused on bringing veterans of World War II to the National World War II Memorial, and any veteran with a terminal illness to see the memorial of the war they fought in. The program will “naturally transition” to focusing on veterans of the Korean War, the Vietnam War, and subsequent wars as the veterans of those wars get older.

The veterans on the honor flights are escorted by volunteer guardians, who help them on the flight and around Washington. The flights arrive in any of Washington’s three area airports: Ronald Reagan Washington National Airport, Baltimore/Washington International Thurgood Marshall Airport, and Washington Dulles International Airport. Southwest Airlines is the official commercial airline of the Honor Flight Network, though the network utilizes many national airlines. An honor flight of 100 people, including veterans and volunteers, costs about $30,000, which is covered by donations with assistance from the airline.