–Student safety and a “Comprehensive School Safety Plan” were topics of a Thursday night parents’ meeting at Daniel E. Lewis Middle School in Paso Robles. Dozens of parents attended the meeting, which was opened by Paso Robles Joint Unified School District Superintendent Chris Williams who spoke about the school district’s commitment to providing the best support for students. Williams said, “We want to be able to do everything we can for our children.” 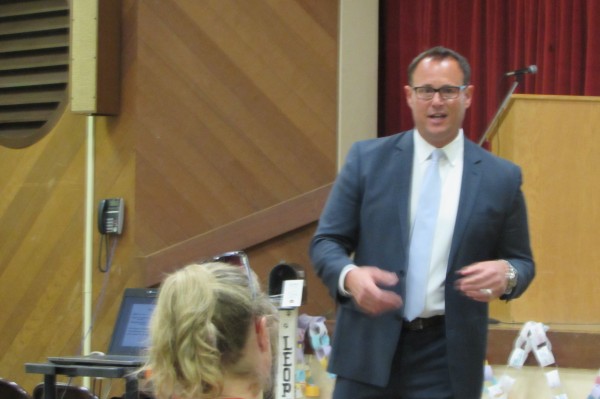 Paso Robles School District Superintendent Chris Williams spoke about the district’s commitment to providing the best support for its students.

Director of Secondary Education Jennifer Gaviola presented an overview of the school safety plan, which includes behavioral interventions, anti-bullying procedures and school and community resources available to parents and students. Counseling services are available on a daily basis for all students at all school sites. Schools, including the Lewis Middle School, have increased counseling staff, school intervention specialists, and mental health specialists dedicated to implementing a Positive Behavior Intervention and Support (PBIS) component of the school safety plan. Public Information Officer Martha Clayton said that nine additional counselors are on district staff that includes intervention specialists and psychologists.

California Education Code 32280 requires that schools implement a school safety plan that includes “strategies aimed at the prevention of, and education about, potential incidents involving crime and violence on the school campus.” The Paso Robles school district adopted a comprehensive plan in November 2015. Thursday night’s presentation at Lewis Middle School was the first in a series of meetings presenting the plan to parents and school staff. The next meeting is at 5:30 p.m. on March 9 at George H. Flamson Middle School. Lewis Middle School parents who missed Thursday are encouraged to attend the Flamson meeting.

Gaviola made a distinction between “mean behavior” and bullying behavior. “Bullying is an event that is repeated over time, where there is an imbalance of power,” said Gaviola. Mean behavior, she said, would include incidents of students “not being kind” but not necessarily continuing or escalating behavior. Teachers and school staff have a responsibility to intervene when students are displaying inappropriate behavior, said Gaviola. The school district has two trainers who are certified by the OLWEUS Bullying Prevention Program. The district has been using this program since 2003. Clayton says, “The training is on-going and is for all staff members who work with students.”

The school district policy 5131.2 states, “No student or group of students shall, through physical, written, verbal, or other means, harass, sexually harass, threaten, intimidate, cyberbully, cause bodily injury to, or commit hate violence against any other student or school personnel.” Students who do not exercise self-discipline are subject to a number of different detentions depending on the circumstances, including suspension.

The district’s policy on bullying can be found online. Click on the GAMUT link and use the login and password that are provided on the web page.

When bullying does happen, Clayton said that anyone observing the behavior should intervene to stop the behavior and report the incident to the school. Students and parents can report incidents to the school, and school administration will also inform parents when incidents come to their attention. Students can report bullying anonymously. The district’s policy also addresses the intervention and reporting procedures and may include law enforcement in some cases.

Despite the resources in place, bullying still occurs. Monica Gusimat, the mother of a Flamson Middle School student, shared her experience with the Paso Robles Daily News:

“My daughter is severely bullied on a daily basis, I pulled her out of school two weeks ago. The principal contacted me about a screen shot he had received, the girls were telling my daughter to kill her self, this is huge and these kids are doing this, I am pressing charges tomorrow against two girls and more if need be, this has to stop! these kids need to be held accountable for their actions. My daughter is an 11-year-old sixth grader, her life has been flipped upside down because of this. She don’t go to school  (home schooled now). She has been removed from all Internet access unless I am present, and these little brats are still in school and still continuing to bully and harass her. The schools are helping but there needs to be more what can we do?”

In an interview, Gusimat said her daughter is now enrolled in a home school program and will not be returning to Flamson Middle School. “She just wants to be left alone,” she says.

When asked about the Gusimat incident, Clayton said, “The district is aware of the case and is taking the appropriate and necessary steps to provide support for all families and students involved.”

In the case of a recent suicide of a 12-year-old student from Lewis Middle School, Clayton said neither the district’s investigation nor the police investigation have uncovered any evidence that bullying was involved. Paso Robles Police Department officials did not return requests for comment on the investigation.

Following the tragedy, the school district responded by sending additional counselors to meet with students who knew the girl at Lewis Middle School and other schools in the area.

Resources for dealing with bullying

Bullying in schools has gained national attention in the past few years and several government and private resources are providing information and resources to the public. These resources include: