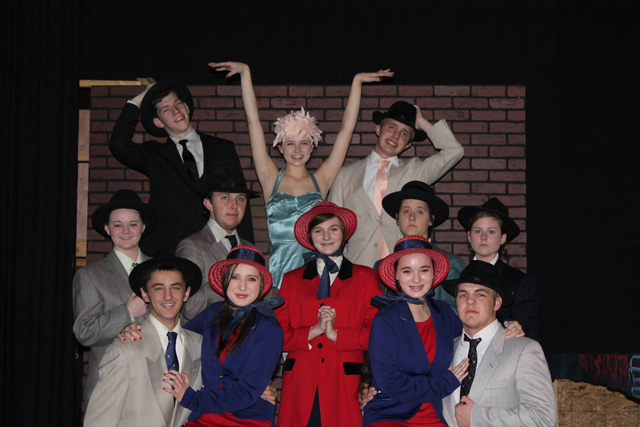 Three residents of the city of Paso Robles have lead rolls in Mission College Prep’s production of Guys and Dolls: John Hollander, a senior, in his final Drama Club production, having performed in every play for the past four years, and introducing sophomores Matt Nino and Alex von Dohlen in their first on stage roles as Sky Masterson and Nathan Detroit.

All the hot gamblers are in town, and they’re all depending on character Nathan Detroit to set up this week’s incarnation of “The Oldest Established Permanent Floating Crap Game in New York.” The only problem is, he needs $1,000 to get the place. Throw in Sarah Brown, who’s short on sinners at the mission she runs; Sky Masterson, who accepts Nathan’s $1,000 bet that he can’t get Sarah Brown to go with him to Havana; Miss Adelaide, who wants Nathan to marry her; Police Lieutenant Brannigan, who always seems to appear at the wrong time; and the music/lyrics of Frank Loesser, and you’ve got a musical.

The show includes the songs: “Fugue for Tinhorns,” “Luck Be a Lady”, “Sit Down, You’re Rocking the Boat”.

Performances are scheduled through March 9 on Fridays and Saturdays at 7 p.m. and Sundays at 2 p.m. All performances are at Mission College Prep’s Performing Arts Center, 682 Palm Street, San Luis Obispo. Tickets will be sold at the door: Adults $10, Seniors and Students $7.