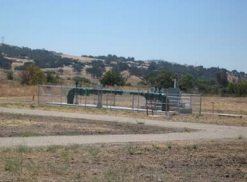 One of the city’s key, and untapped, water sources is the underflow of the Salinas River. Under a permit from the state of California, Paso Robles is allowed to draw approximately 4,600 acre feet of water each year.

For some time the City’s water engineer, Christopher Alakel, has been exploring ways to augment Salinas river underflow during the City’s peak demand season, especially during periods of drought when water production can decline.

Beginning July 1, underflow augmentation will commence and continue throughout our peak water demand season. During this initial summer of testing, the Water Division will evaluate the effort as a means of maintaining Thunderbird Wellfield production in the summer months. Permits to this were just secured by the city from the Army Corps of Engineers and Fish & Game.

“We are allowed to deposit at the rate of 3.6 Million gallons per day,” says Paso Robles City Manager Jim App. “It is estimated/planned to release approximately 1,000 acre feet this July/August/September. This initial trial release will be evaluated to determine whether, and to what degree, it benefits river well production.”