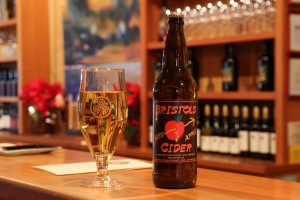 Hard cider is a rapidly growing trend in the U.S., but one California winemaker has been working on an English-inspired version for nearly two decades. Paso Robles’ Lone Madrone Winery is now out with its 2012 vintage Bristols Hard Cider, made using apples sourced entirely from San Luis Obispo County orchards, primarily in the Sea Canyon region.

The winery is owned by siblings Neil Collins and Jackie Meisinger, who grew up in England and found it hard to access quality hard ciders here in California. As a result, Collins began experimenting with small batches of cider back in 1994 under the Bristols name.

Since then, the cider line has grown into a variety of styles, including one that’s bourbon cask aged and bottle conditioned, using a single apple varietal. There is also a version that is fermented in retired wine barrels. However, the bulk of the cider is made in stainless steel tanks using native fruit yeasts for the fermentation process.

There are currenly only a handful of commercial hard cider operations in California, and Lone Madrone is the only local producer in San Luis Obispo County.

The winery’s recently released vintage is available on tap at some of the Paso Robles wine region’s top restaurants—especially those that feature a local, seasonally-inspired menu.  The cider on the dry side, and is rather powerful at 7.7 percent alcohol by volume.

The Lone Madrone tasting room is the source for bottles of the cider, running $10 each for 22 ounces.