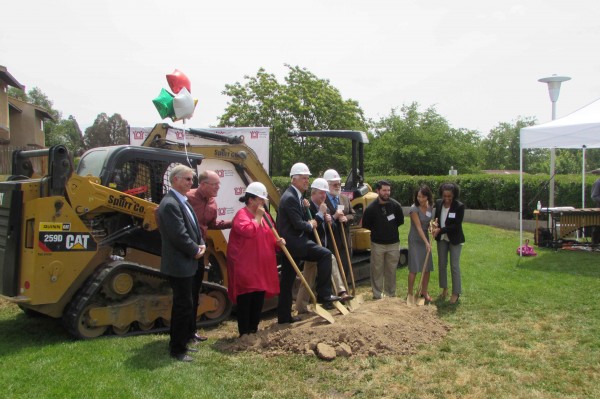 Apartments were slated to transition to market rate rent

–Peoples’ Self-Help Housing (PSHH) held a groundbreaking ceremony for a playground, new community center and renovations to the Creston Garden Apartments on Tuesday. Originally funded through the USDA Rural Development’s 515 program and built in 1980, Creston Garden, located at 1255 Creston Road, is made of 60 units occupying 15 two-story townhome buildings. The apartments were purchased by PSHH to prevent them from transitioning from affordable housing to market rate housing. Escrow closed in April. Construction is expected to be completed in 2017.

Much needed maintenance was put off at the aging property, and the 2004 Paso Robles earthquake contributed to foundation damage. Renovations to the apartment complex include a new 1500 square foot community room, a playground and after-school program for children, foundation and drainage system repairs, security cameras, new appliances, cabinetry, flooring and fixtures and upgrades to comply with American with Disabilities (ADA) standards. Fowler said the construction and renovation project will create 150 jobs.

Lupe Hernandez, a 25 year resident of the Creston Apartments said she is excited about the project but a little nervous about temporarily relocating while her home is renovated. “I love this place,” said Hernandez, “I raised my three boys here.” Another resident, Marisela Vela, said the residents with children are happy to have a safe playground so their children can play outside.

Also attending was Fifth District Board of Supervisors candidate Eric Michielssen. “I was part of the team looking this land over for this project before it was built,” said Michielssen. “I’m glad to see these apartments continuing as affordable housing to help meet the need in this county.” Michielssen served as Corporate Broker and Asset Manager for PSHH for 17 years.

The project is funded through joint efforts of the USDA Rural Development under the Section 515 program, and JP Morgan Chase Bank and Enterprise Community Development. Development partners include Keith Hall Architect, North Coast Engineering and Robert Andrew Fowler Landscape Architecture. “Working with the the USDA, Enterprise Community Investment, National Housing Law Project, and JP Morgan Chase, we were able to raise $5.7 million to acquire the property and $14 million for renovations,” said Fowler.