Local leaders meeting with Sacramento politicians this week walked away disappointed after hearing their proposal to form a groundwater basin district may not clear legal hurdles. 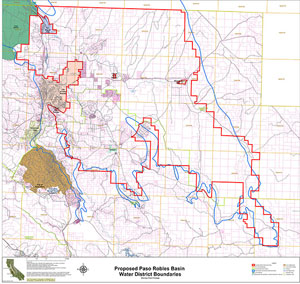 On Wednesday county officials including Supervisor Frank Mecham met in Sacramento with Achadjian and state Sen. Bill Monning and heard the disappointing news: The state Office of Legislative Counsel has concerns about the legality of the hybrid solution. The reason is that although water boards elected by landowners are common, they are an older structure. The trend in Sacramento is to support new special districts that are elected by popular vote.

“The bill appears to raise potential constitutional and legal questions,” Achadjian says. “I am reviewing these concerns with my staff, and will work with all interested parties to facilitate a local solution to address the needs of the Paso Robles Water Basin. I will continue to research the facts and will report back to the Board.”

“My goal with this legislation has always been clear – to enable our local government to maintain control over our water,” Achadjian says. “I introduced AB 2453 at the request of the Board of Supervisors with the understanding that the bill was a work in progress and would be amended as negotiations continued.”

A spokeswoman for Sen. Monning said the senator has no comment on the matter.

The two groups who are proposing the water district issued a joint statement: “Initial feedback from our legislators makes it evident that the special legislation to create a hybrid board of directors faces significant scrutiny in Sacramento. The new petition for a water district will not be filed with LAFCO until the bill has been fully vetted by Legislative Counsel and we have greater clarity on how best to move forward. We strongly believe that a locally managed water district is the best solution for the Paso Robles Groundwater Basin.”