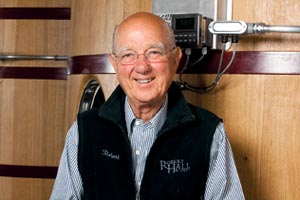 The Paso Robles Wine Country Alliance reported today that Robert L. Hall, owner of Robert Hall Winery, passed away peacefully at his home Saturday at the age of 85 from complications related to an extended illness.

The report continues, “For a period in his life he was also involved in champion horse breeding. In the 70’s, he and his family took a trip to Southern France and discovered a new passion – wine. After researching various areas, he settled in Paso Robles for the location of his vineyards and winery. His vision came to fruition when he began making wine in 2001.

“Up to his final days, he enjoyed traveling nationally for sales trips, hosting wine events, visiting with guests in the tasting room, and working in the office daily.

“He is survived by his spouse, Margaret Burrell Hall, and his three daughters. Margaret will continue running the winery and hospitality operations with the same level of care and attention that guests have come to expect.

“Our heartfelt condolences go out to Margaret, Robert’s family and the entire staff of Robert Hall Winery.”

Memorial services will be announced at a later date.