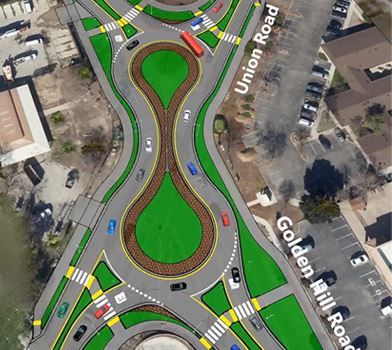 – The City of Paso Robles has announced that the improvement project to replace the four-way stop at Golden Hill and Union Road with a roundabout is heading into its next phase. Motorists should prepare for detours in the area beginning in early August.

The installation of a roundabout at this location was envisioned and authorized by the City Council in 2011 with the adoption of the city’s circulation element.

Preliminary on-site work in the area began in June of 2021 with the relocation of cable TV and gas mains, which did not require any road closures. Removal of asphalt at the worksite will begin in August, necessitating the closure of the intersection of Golden Hill and Union, which will remain closed until the roundabout is complete in late 2023.

“My family is really looking forward to the completion of this much-needed project,” says Paso Robles resident Trisha Butcher. “That area has had its fair share of crashes and confusion on whose turn it is. This will be a great asset to the area with traffic moving more fluidly. Small price to pay with detours by having a safer intersection.”

Residents coming into town from the east should plan to use Ardmore Road to go south of the closure, or turn right on Golden Hill then left on 46 East to have a safe, protected left-hand turn when accessing downtown or anywhere north of the closure (see detour maps.)

Businesses in the area will all remain open during construction. Signage will be placed around the intersection and on the 13th Street bridge reminding residents of the closure and detours.