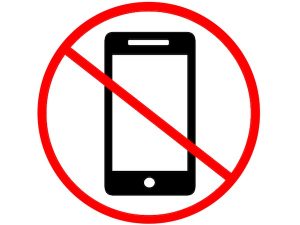 Overall goal is to unify school policies on cell phone use

–During a May 12 board meeting, the Paso Robles Joint Unified School District discussed the potential implementation of a uniform, district-wide technological ban on cell phone use. The proposed ban would restrict cell phone use during non-instructional time for high school, at any time on campus for the remaining schools, and would allow cell phone use for special cases, such as an emergency.

“The goal of updating our policy is to be uniform throughout our district in policy enforcement and expectations, to mirror neighboring district policies, and to accept [the California School Boards Association’s] new policy recommendation,” Director of Student Services Joseph Williams said.

The updated ban can essentially be separated into regulations at the high school level and at middle school, elementary school, and preschool levels. The high school ban would not deviate much from the current policy; the updated policy would limit cell phone use during instructional class time and passing periods. The remaining schools would not allow cell phone use anywhere on campus, prompted by “…much of the research that has been published on the negative impact of phones on the developing brain,” Williams said.

The updated technological ban would have five steps of consequences for students who use any technological device, such as cell phones or smartwatches, during instructional periods. A first-time offense might have assigned community service or computer usage probation. Further offenses include lunch or after school detention, Saturday school, or suspension for a fifth offense.

The role of cell phones as an educational distraction is a top concern of the district, according to district reports. Cell phone infractions consistently rise each academic year; 434 violations were recorded for the 2016-2017 school year while 638 violations occurred in the 2018-2019 school year. While some districts have taken measures in providing cell phone pouches that lock so students cannot open them until approved breaks and after the school day, such as Lopez High School, PRJUSD announced they do not have the budget space to purchase such materials.

A recent PRJUSD survey showed the difference in support between teachers and students for this updated policy. Out of 189 teachers, around 90-percent supported the ban, while out of 1,623 students, around 91-percent did not support the ban, according to reports.

“I think it’s reasonable to require our phones be turned off and in our bags during class. If this rule is broken by a student, that student should suffer the consequences,” said Elsa Williams, a Paso Robles High School junior. “However, having everyone put their phones into cubbies or lockers during class or other extreme methods aren’t the right way to go. Making us lock up our phones sends the message that we are seen as irresponsible and incapable of self-control”.

The district plans on working with the high school students to address concerns with the updated policy.

“The policy is not much of a change for 9th-12th graders. We will continue to partner with our student leaders and include them in the conversation if and when additional changes need to be made moving forward,” Williams said.

A decision to implement or deny the updated policy is scheduled for a vote at the May 26 board meeting.