Paso Robles News|Saturday, July 11, 2020
You are here: Home » Top Stories » School Board member censured for threats and violating board policies

School Board member censured for threats and violating board policies 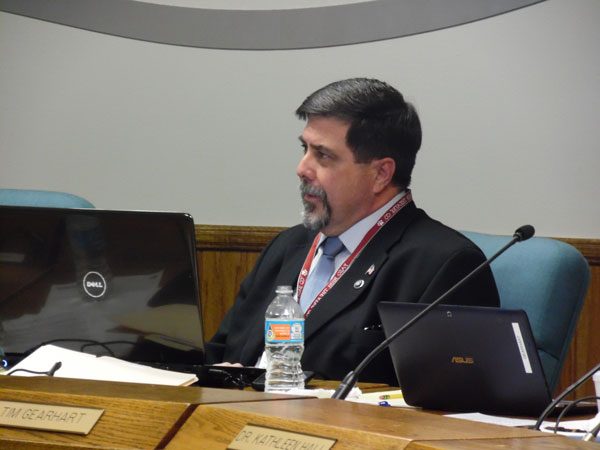 Citing violations of school board bylaws and unacceptable and unprofessional conduct, the Paso Robles Joint Unified School District Board of Trustees (PRJUSD) voted last night 6-1 to censure fellow Trustee Chris Bausch. Bausch was the single dissenting vote. With the censure the board is making a public proclamation that the board disapproves of the conduct of Bausch and essentially directs Bausch to “treat fellow board members and district staff with dignity and respect at all times.”

According to a resolution prepared by staff for last night’s meeting, the incidents leading to the censure began in April 2016 when Bausch “exceeded his authority by negotiating directly with a vendor who was attempting to win a contract with the district.” Bausch made public statements claiming a business relationship with the vendor, “creating a real or perceived conflict of interest.” The project was ultimately delayed by several months.

The resolution itemized Bausch’s behavior to include:

At last night’s school board meeting, Bausch apologized to board members and spent over an hour explaining and refuting allegations made against him by other board members. Bausch responded Wednesday afternoon to the censure resolution in a letter to the Paso Robles Daily News >> Click here to read it.

About ten people spoke in support of Bausch. Former County Planning Commissioner Jim Irving told the school board that he’s worked with Bausch and always found him to be thorough but reasonable. Irving is a Harvard graduate who grew up in Paso Robles and attended local schools. He said a censure is a serious act, particularly in light of the allegations. He said he wonders if there’s something else going on that the board does not want to reveal.

Board President Field Gibson explained that the board cannot remove an elected trustee. He said a censure is intended to correct another trustee’s behavior.

Board member Joel Peterson, one of those opposed to the resolution at the February 28 meeting said he was hoping to “avoid a censure and figure it out through conversation.” Regarding last night’s decision Peterson said, “It was an unfortunate situation we tried to resolve before it got to this point.” Peterson said he is looking forward to putting the matter behind and the board working together for the district and the students.