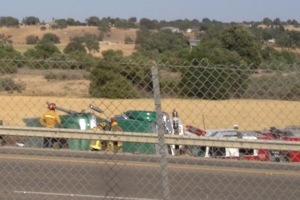 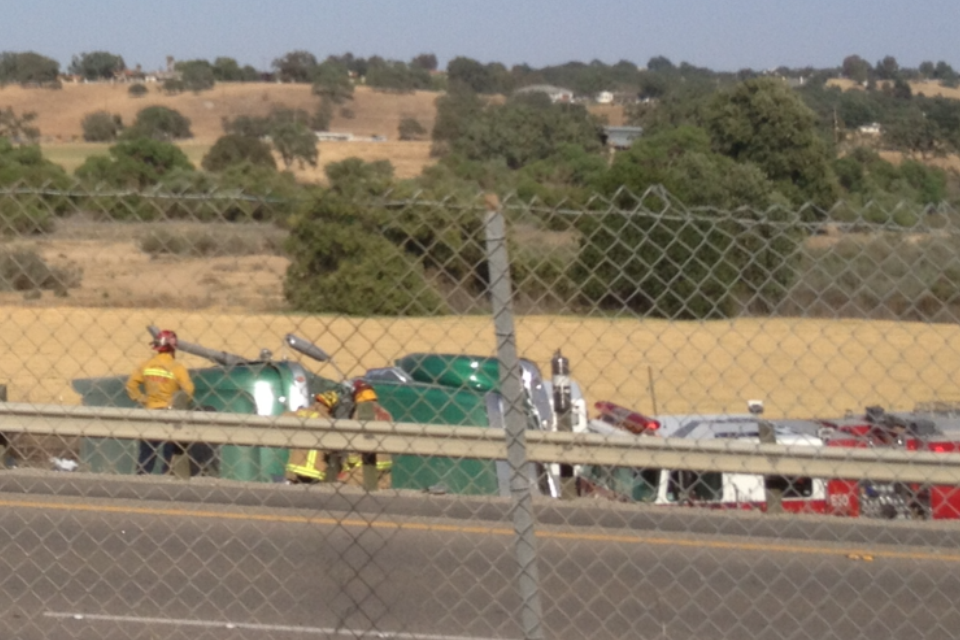 Updated 5/4/13 7:30 am – A large semi-trailer truck flipped over on northbound Highway 101 in Paso Robles on Friday afternoon, closing the freeway and disrupting local commutes for hours.

The accident was first reported at 4:43 p.m. just south of the Spring Street offramp, according to the CHP. Reports say no other vehicles were involved in the crash and the driver of the truck suffered minor injuries.

“I was 3 or 4 cars behind the truck when it flipped,” said Michelle Minton on Facebook. “It was crazy! Looked like something you’d see on a movie.”

The overturned trailer blocked both northbound lanes of traffic. Cars were completely stopped on the freeway for miles south of the accident. Drivers got out of their cars trying to figure out what was happening. Northbound traffic came to a standstill as well. Drivers diverted to Ramada, Theater Drive, Vine Street and River Road clogging up surrounding side roads.

The Paso Robles Police department sent out an alert at 5:41 p.m. : “ALL LANES NOW OPEN – Avoid 101 both directions and 46 west, Theater Dr due to traffic collision north bound 101.”

But witnesses reported ongoing delays: As late as 8:30 p.m., traffic was still backed up and the truck was hauled off the highway at around 10 p.m., according to reports. It took an hour to travel 10 miles, a driver reported.

Drivers on northbound Highway 101 south of Paso Robles are standing outside their cars in stopped traffic wondering what to do.

Freeway traffic is at standstill for miles south of town from a semi truck accident in the northbound lanes near the Spring Street offramp. The accident happened just before 5pm.

Southbound traffic is severely effected by the crash too. Several emergency vehicles responded to the scene, some entering on off ramps against the flow of traffic. Many drivers are using River Road, Theater Drive and Ramada to bypass the crash. The traffic is filling up side streets.