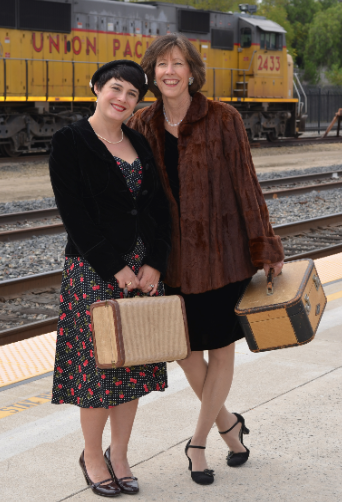 Vocalists Dawn Lambeth and Judy Philbin will combine their talents on stage together for the first time, taking listeners on a “Sentimental Journey, from Route 66 to California Dreamin’”, Saturday, September 28, 7 p.m. at the Templeton Performing Arts Center. Accompanied by a five-piece band, the program will include familiar tunes from the early American jazz era into the 70’s, including some original compositions.

Lambeth has appeared on four compact discs, winning praise from reviewers on both coasts, and has performed at more than a dozen renowned jazz festivals in the United States and Japan. She brings deep feeling to the songs of the 20’s, 30’s and 40’s – those of the Gershwin brothers, Irving Berlin, Hoagy Carmichael, Duke Ellington, Cole Porter, Eubie Blake, Fats Waller, and others—as she literally channels the memorable singers of that period. Lambeth is well-know as a solo performer as well as a member of the Usonia Jazz Band.

Phibin, a sought-after performer on the central coast, injects her personal style into contemporary and folk, as well as jazz standards, delivering each song with the skill of a lyric storyteller. Her pure, clear tone has been called uplifting, healing, evocative and above all, beautiful. Judy’s first CD, “Candle in the Window”, brought performance invitations from Portland, Oregon, to Minneapolis and Boston, while a second CD, “Keeping it Simple”, will be released this month.

The concert is co-sponsored by the Templeton Chamber of Commerce and Templeton Unified School District. The Templeton Performing Arts Center is a 300-seat theater located on the high school campus, 1200 Main Street in Templeton.