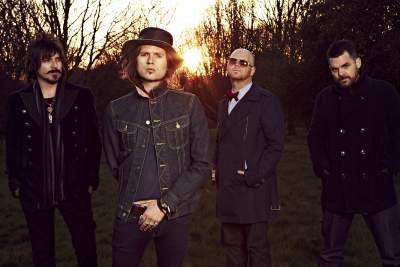 Maximum-blues-infused, rock ‘n’ roll band Rival Sons will be heading out on a 14-city U.S. tour that will include a stop in Paso Robles on Wed., Sept. 4 at the Vina Robles Amphitheatre supporting one of their hometown heroes, Sammy Hagar, on his “Four Decades of Rock” summer tour.

Guitarist Scott Holiday says, “Well, we’re finally hittin’ our homeland for a handful of tour dates. Ask and ye shall receive! And what a cool thing to get to go out and support a legend…and super cool fella like Mr. Sammy Hagar! I think this one’s gonna be a blast.”

Hagar has been a fan of the Rival Sons for a while, since he first heard their 2009 debut Before The Fire. “These guys are the real thing,” says Hagar. “Their first CD was great, showing off a lot of styles from the 60′s, 70′s and 80′s. These boys have done their homework…now road-tested. The Sons have made a CD (Head Down) that truly lives up to the band’s name. This is a giant step from a great previous CD…not easy. But for those that like classic rock but are tired of the same old songs, I highly recommend this CD…and even better, go see ‘em live–they deliver.” Hagar and RIVAL SONS frontman, Jay Buchanan, come from the same town of Fontana, CA.

The acclaimed Long Beach, CA band–Jay Buchanan (vocals), Scott Holiday (guitar), Robin Everhart (bass) and Michael Miley (drums)–recently concluded an international headlining tour with shows in Canada, Europe and the U.K. as well as a string of dates in the Midwest U.S. May 29-June 4. REAL DETROIT WEEKLY recently noted of their packed show at St. Andrew’s Hall: “These guys not only have the sound, but the look and the mojo to make anyone pay attention” (6/5). EXAMINER.com exclaimed of the show at Reggie’s in Chicago, “Rival Sons cast a spell…” (6/9).

The band is on the road supporting their third album HEAD DOWN (released March 19th on Century Media Records), which reached #1 on the Rock chart in 2012 in the U.K., garnered the group four-star reviews (including Mojo and the Guardian) overseas as well as magazine covers and the “Breakthrough Artist” award at the 2012 Classic Rock Awards show in London. The album features “Keep On Swinging,” which hit #1 on the Active Rock Radio Charts in Canada and remained at the top for six straight weeks. The band made their major national television debut when they performed “Keep On Swinging” on ABC-TV’s “Jimmy Kimmel Live!” in March, which can be viewed here: