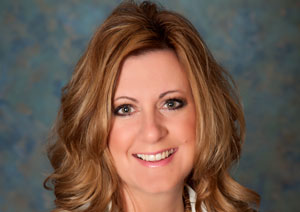 Kelli Beck, a South County native, has returned to the Central Coast to serve as senior vice president of marketing and service management for SESLOC Federal Credit Union. In her new position she oversees all aspects of marketing and member services for the $632 million credit union. SESLOC has a branch in Paso Robles at 1245 Spring St.

Beck grew up in Arroyo Grande and graduated from Arroyo Grande High School. After receiving a degree from San Diego State University, she remained in Southern California and began her financial services career as a teller. Prior to joining SESLOC, Beck had advanced to vice president of marketing at North Island Credit Union in San Diego, a position she held for nine years. She guided North Island’s marketing team, public relations, community partnerships, and online strategies.

SESLOC President and CEO Geri LaChance said that the combination of Kelli’s skills and experience and her interest in moving back to the Central Coast made her an ideal fit for SESLOC. “Kelli has it all: she is familiar with the market, she knows the credit union business inside and out, and she is experienced in the many details that go with opening a new headquarters,” said LaChance. “We are delighted to have her on our team.”

Beck, who said returning to the Central Coast had been a longtime goal, lives in South County with her family. She is happy to be able to raise her teenaged son in the same community where she grew up.

SESLOC Federal Credit Union has more than 37,000 members, 118 employees and assets of $632 million and has been serving people in San Luis Obispo County since 1942. It is a full-service financial institution with branch locations in San Luis Obispo, Paso Robles, Arroyo Grande, and Atascadero. SESLOC will be moving from its current headquarters at 11491 Los Osos Valley Road in San Luis Obispo to its expanded new campus at 3855 Broad Street in mid-October.