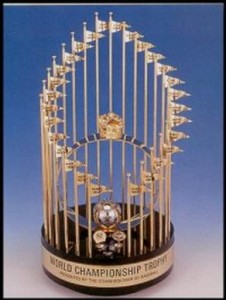 Fans of the San Francisco Giants will be welcome to come out and get their picture taken with the Giant’s World Series Championship Trophy.

Paso Robles is planning to host the almost 30-pound sterling trophy on Friday, Feb. 15, 2013. The trophy will be in town from 4:30pm to 6:30pm at the Gazebo in the Downtown City Park at Spring and 12th Streets.

The World Series Championship Trophy Tour is making three stops on the Central Coast in February. The Trophy Tour starts January 8 in Sacramento.

Lompoc is on the tour schedule for Wed., Feb. 13.  The trophy tour will go to Farmers Market in downtown San Luis Obispo on Thurs., Feb. 14. Leaders of the San Luis Obispo Downtown Association plan to put the trophy on display on the 600 block of Higuera Street near F. McClintock’s Restaurant.

The SF Giants beat the Detroit Tigers in October to capture their second world championship in three years.