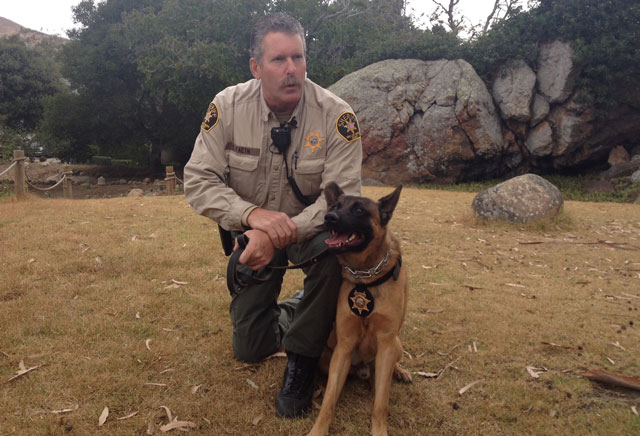 The San Luis Obispo County Sheriff’s Office officially introduced this week its newest K9. “DJ” is a 20-month-old Belgian Malinois. who is trained in narcotics detection, tracking and apprehension. His handler and partner is Deputy Steve Faeth. DJ replaces Deputy Faeth’s previous K9 “Nico” who was medically retired from the force after two years because of seizures associated with canine epilepsy.

DJ is one of six highly-trained dogs in the Sheriff’s K9 unit. Sheriff Parkinson has greatly expanded the K9 unit from one dog in 2010 to the present contingent of six. Last year alone, the K9’s were called out for service more than 1,800 times. This resulted in 42 suspect apprehensions, and the detection and recovery of more than 38 grams of cocaine, almost 7,000 grams of methamphetamine and almost 1,000 grams of heroin. DJ has been on the job since the beginning of 2014.

Canine Tutors of San Luis Obispo provides dog obedience training that guarantees results even around the most distracting environments all the while keeping your dogs happy tail-wagging attitude. You can choose from private one on one sessions or train in a group setting going at your dogs pace. Canine Tutors incorporates cutting edge training technologies that will allow you to train your dog even from great distances and cut out the confusion for your dog. Call Today For Your free First Lesson! (805) 400-8309.