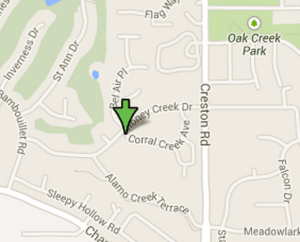 The Paso Robles Police Department responded to two shooting events over the weekend. On Friday, Aug. 16, 2013, at about 11:30 p.m. police responded to the 1200 block of Corral Creek Avenue after receiving numerous phone calls from residents who reported hearing gunshots. The second event happened on Sunday, Aug. 18, 2013 at approximately 2:45 a.m. at the same location. There were no injuries reported as a result of either incident and no suspects have been identified.

After the August 16 shooting, investigators found evidence that a small caliber firearm had been shot toward an apartment they believe might have been occupied at the time. However, officers have been unable to locate a victim or a suspect associated with the shooting. Several neighbors reported hearing four to five gunshots around 11:30 p.m. and saw a shadowy figure running from the area directly after the event. Neighbors also reported seeing several people run from an apartment they believe might have been the intended target.

At approximately 2:45am, on Aug. 18, police officers returned to the apartment complex after neighbors again called and reported hearing gun fire. Officers recovered evidence that a small caliber firearm had been fired in the area. Again, officers were unable to locate a victim or a suspect.

The department’s Special Enforcement Team is investigating the shootings in conjunction with the San Luis Obispo County Sheriff’s Department Gang Task Force. The investigation is being treated as a gang involved incident. However, further details about these two incidents are being withheld while investigators continue to interview witnesses and collect evidence.

In response to these two incidents, the PRPD has increased its patrol presence in the area. Two additional patrol officers have been deployed within the city to augment normal night time patrol activity.
  
The Paso Robles Police Department is requesting the public’s assistance with solving these crimes. Anyone with information about these, or other crimes, is encouraged to call the Paso Robles Police Department at 805-237-6464. Or persons wishing to remain anonymous are encouraged to call Crime Stoppers’ 24-hour hotline at 549-STOP or by texting “SLOTIPS” plus your message” to CRIMES (274637).