Sip and Savor: Is merlot trending? 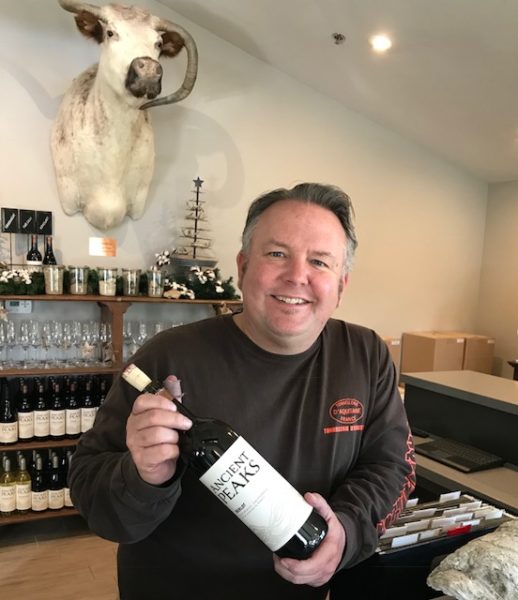 The much maligned varietal is poised for a comeback

-The new year traditionally rings in with the saying “Out with the old, in with the new.” But how about revisiting the old? Take merlot, a varietal that’s been hiding under the rock for over a decade. Is it poised for a comeback?

The answer from a group of Paso winemakers is a resounding yes. In fact, one of them, Goran Bjekovic, chuckled “When did merlot die?”

The owner-winemaker of Aleksander Wine fell in love with this variety during his time in Italy. His passion for the grape has led him to produce sublime merlot-driven wines balanced with a touch of cabernet sauvignon at his Creston winery. His two labels, the reserve black and the white, are so superb that they could rival Bordeaux’s Right Bank wines in a blind tasting.

When Bjekovic purchased his 30-acre estate in 2009, its 13-acre vineyard was aready planted to merlot, a variety close to his heart. The winemaker highlights the versatility of merlot as he compares the limitations of the bigger cabernet sauvignon that begs for red meat pairing. “But a merlot can go with anything,” he argued. “It’s well rounded.”

Originally from France, merlot is popular as a blending grape on Bordeaux’s Left Bank and a dominant variety on the Right Bank shining in the exalted Chateau Petrus, one of the most expensive wines in the world, a wine that is 100 percent merlot since 2010. Less tannic than a cabernet sauvignon, merlot is softer and rounder on the palate with a delicate acidity. 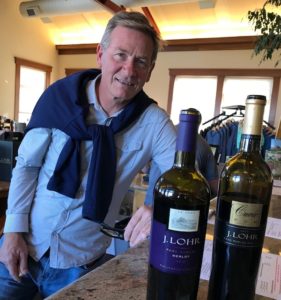 Of the 40,000 acres planted in Paso, some 14 percent is planted to merlot compared to 39 percent planting of cabernet sauvignon. According to the USDA’s National Statistics Service, merlot numbers show a four percent increase in Paso Robles planting since 2012 twice as much as the increase in Napa and Sonoma combined.

As we welcome the new year, merlot could well experience a turn around, considering that Napa Valley’s Duckhorn Vineyard merlot garnered the number one spot on Wine Spectator’s 2017 Top 100 list. Napa and Sonoma wine regions have long enjoyed a reputation for producing distinctive merlot wines coming from such pedigreed names as Pahlmeyer, Matanzas Creek, Hall, Shafer, Rombauer and Chateau Souverain to name a few.

Merlot was the go-to wine in the 1990s, especially in California. In many restaurants this would be the popular wine by the glass or the house wine. Remember Marilyn Merlot? The onslaught led to a plethora of mediocre merlots.

“Merlot was over planted, overproduced and getting a checkered reputation,” commented Brian Terrizzi, owner/winemaker of Giornata and Broadside. 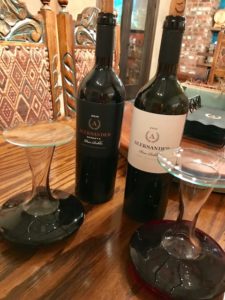 Then came the 2004 multi-award winning movie, “Sideways,” a road movie set in the Santa Barbara County wine region that elevated the pleasures of pinot while relegating merlot to a lower rung. If there’s one reason for the decline of merlot sales across the country, it could well be traced to the seminal line delivered by the film’s Miles, brilliantly played by actor Paul Giammatti, when in a wine-induced rage, he declares to his buddy Jack, “I am not drinking any f***ing merlot!”

That was the straw that broke merlot’s back. Silky, sexy pinot became the darling of wine fashionistas and merlot became an ugly sister. That’s about to change as we step into 2018.

“It’s flying off the shelf,” exclaimed Neeta Mittal, co-owner of LXV Wine of their 2015 Reserve Merlot. The minuscule production of 15 cases crafted from the westside Cira vineyard is not available for taste and there’s a two-bottle sale limit.

Ryan Render of Rendarrio Vineyards is among Paso’s small merlot producers, crafting a lush cherry-loaded varietal merlot like the 2013 One Step Beyond. Although he finds merlot supple, sexy, savory and plush, he found it difficult convincing visitors to try his 2015 barrel sample of The League of Shadows, merlot-driven blend, at the 2017 Garagiste festival. People were eager to taste it when he offered it as a cabernet sauvignon and merlot blend. “But when I said it’s a merlot-cab blend, they didn’t want to go there,” he reflected. “But the younger crowd didn’t seem to mind much.” 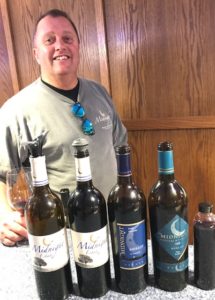 And that’s what Mike Sinor is betting on — the millennials. The director of winemaking at Ancient Peaks Winery is convinced the turn around will be sparked by this generation. “By definition a hipster is a contrarian,” he mused. And because merlot is riding low now, it might just get hip again. “It’s approachable, soft and a good entry level wine.” Although the “Sideways” effect did cause a 30-40 percent loss in sales, merlot still outsells pinot, Sinor noted.

Merlot rules at Ancient Peaks. From its initial launch of the wine in 2005, 60 additional acres of merlot were added in 2014 to the Margarita vineyard bringing the total to 140 acres. The southern most vineyard, recognized for its top quality soil, is where Robert Mondavi initially planted merlot. “When Ancient Peaks took over the lease we championed merlot because it was planted on the best soil,” Sinor noted.

Among the Paso producers I met, Rich Hartenberger is one carrying the torch. “Ever since that stupid movie, I’ve been trying to get merlot back,” he emphasized. The owner/winemaker of Midnight Cellars has been producing “unapologetically 100 percent merlot” since 1999. Turns out his unique marketing style has convinced many a hesitant visitor and spun merlot into one of the tasting room’s popular wines. “Our sales are starting to pick up and our distributors are ordering it.”

We savor a vertical tasting of Midnight Cellars’ 1999, 2006, 2010 vintages and the current release of 2014. Overall the wines are lush with plum fruit and herbaceous, savory notes. The 2017 barrel sample was still young and rebellious. 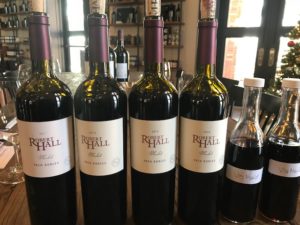 Do people ask for merlot in the tasting room, I ask Steve Peck, red winemaker at J. Lohr Vineyards and Wines. “It’s a tough sell, until I tell them it has 15 percent malbec,” he admitted. But it does open a level of interest to consumers. The winery produces 75,000 cases of merlot annually produced from the 120-acre vineyard in the El Pomar district.

“It lines up with the Templeton Gap and you could grow excellent merlot there,” Peck contended. In the 2015 Los Osos merlot is joined by malbec, which adds perfumy hibiscus notes, and the age-worthy well structured 2012 Cuvee POM is blended with cabernet franc. “Our goal is to get bright fruit character, not overbearing tannins,” said Peck.

Steve Gleason, owner of Four Lanterns Winery, produces an elegant French-style merlot. The lean 2015 Lights Out is blended with a touch of cabernet sauvignon and petit verdot. “It’s emblematic of what we do,” Gleason commented. “We get more layers and a longer finish so it’s a better food wine.” 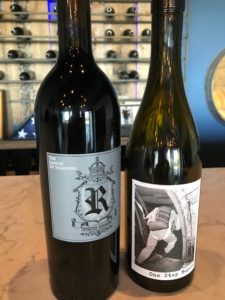 Rendarrio Vineyards’ The League of Shadows and One Step Beyond

At Justin Vineyards and Winery, the 2011 was the first vintage of varietal merlot, noted Scott Shirley, director of winemaking. The wine that garnered 89 points from the Wine Spectator is produced for wine club members but some spillover can be savored in the tasting room. It may not be a blockbuster wine, Shirley contends, but it appeals to those not ready for a big tannic cabernet sauvignon.

“It’s softer, with more fruit up front and fleshy on the palate,” comments Shirley. At its worst a merlot can be thin with no structure. And at its best? “It’s elegant on entry, good mouthfeel mid palate and a soft finish,” Shirley regaled.

Over at Robert Hall Vineyard, I sampled another vertical lineup of merlot – from 2011 to 2014 and barrel samples of the 2015 and 2016 vintages. “It got soft for a while,” informed Don Brady, director of winemaking, on merlot’s downward spiral. “But it’s generally done well here.” All four vintages and the barrel samples showed good structure, mellow tannins and plushy plum fruit.

For Brady, a good merlot is just that, well structured. “It’s gutsy and tends to mature earlier,” he commented. “It’s not weather-threatened like cabernet sauvignon.” The typical Robert Hall merlot produced from estate and sourced fruit is blended with a small amount of cabernet franc. With an annual production of some 6,000 cases, merlot is the third most popular wine at Robert Hall, after cabernet sauvignon and syrah.

Old timers such as Fratelli Perata Winery has been producing varietal merlot since the 1980s, informed second generation Cathy Perata. It was the leading wine in the tasting room. Then came “Sideways.” Visitors would demand that the tasting room take it off the menu list. “It’s amazing the impact of the movie,” Perata exclaimed. However, the loyal customer was not affected by the movie. The 2014 merlot I tasted was aged in neutral and new oak, laced with cherry fruit and a silky finish.

Could this the beginning of a honeymoon with merlot? Peck thinks so. “Winemakers are adding a little love in merlot and because there’s a bias in the market we want to defy that,” he commented.

So when ready to embark on a merlot experience check out other local producers such as Wild Horse, Pomar Junction, Locatelli, Peachy Canyon, Castoro Cellars and Le Vigne, to name a few.