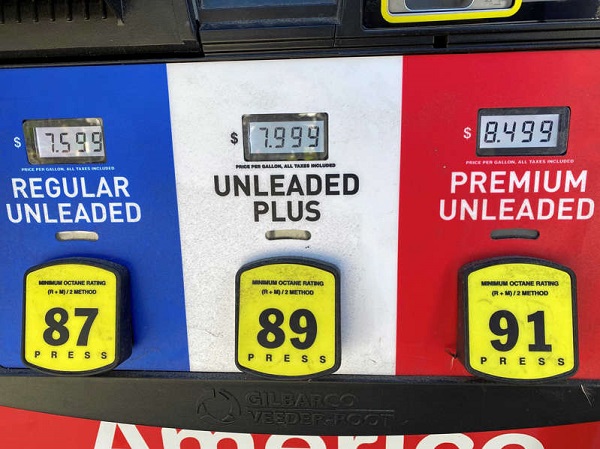 –News about $7.59 per gallon for gas in the little town of Gorda, just north of the San Luis Obispo County line in Monterey County, caught national attention and raised local concerns about climbing gas prices. Examples of news coverage include:

Gorda, also known as the privately-owned Gorda Springs Resort, is a small community along Highway 1 on the Big Sur coast. Mary Vargas, the current manager of the resort is also one of the owners. The resort has a gas station, general store, gift shop, lodging and dining. The gas prices are due in part to expense of having fuel delivered. The scenic, winding drive between Cambria and Carmel is much more suited to cars than to large tanker trucks. Tankers delivering to Gorda are reported to come from as far as Santa Maria and Paso Robles.

High gas prices are not news to Gorda or travelers familiar with the area. On Oct 21, KSBW TV reported, “In July 2019 a gallon of gas cost more than six dollars. In April of the same year, we reported that a regular gallon of gas costs $11.75 per gallon.” In March 2008, ABC News reported that Gorda was “home to some of the priciest gas in the United States,” at $5.20 a gallon. The article credits the high cost to supply and demand. “Since the station is in the middle of nowhere, it is awfully hard to supply.”

In San Luis Obispo County, gas has a way to go to reach $7.59 per gallon. An Oct. 25 Gasbuddy map of gas prices by California counties shows that prices in San Luis Obispo County are lower than Humboldt County and on par with Sacramento, Santa Clara and Inyo counties. As of Oct 25, Gasbuddy shows 10 gas stations in Paso Robles with prices between $4.55-$4.69 and 10 in Atascadero with prices from $4.45 to $4.83.

Gorda is no stranger to headlines

Gorda made headlines in 1979 when the land was purchased by the four young owners of Kidco Limited Ventures. At the time, the Cessna siblings of the Cessna airplane family, Dickie, 14; Bette, 13; June, 15; and NeNe, 11, purchased Gorda with the proceeds from the filming of the movie Kidco about their lives.

The siblings bought the site, including gas station and other businesses, from then owner, Larry Anderson for $580,000. Anderson repossessed the town in 1984. After a landslide cut the town off from visitors, the siblings were not making the payments. There were also some contentious legal actions between Anderson and the siblings father, Richard Cessna. over Cessna’s alleged mismanagement of the businesses at Gorda.

Gorda made headlines again in Oct 1984 when the New York Times printed an article about the “tiny town with view on coast in a peaceful setting” being for sale. Anderson had the town on the market for $950,000.

In 2003, the bodies of two women were found in one of the cabins, the apparent victims of a murder/suicide pact.