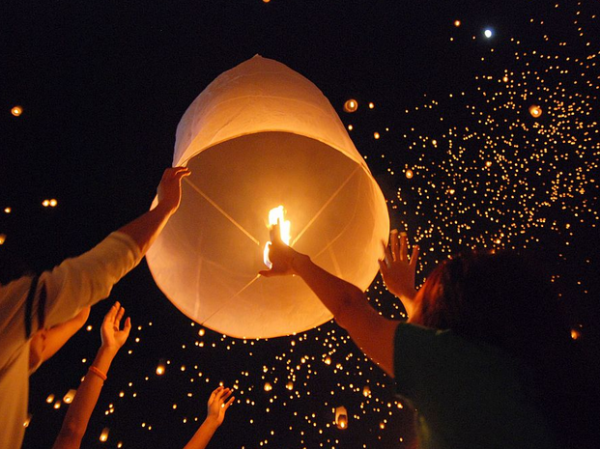 On May 7, 2013 the San Luis Obispo County Board of Supervisors passed an ordinance prohibiting the ignition and launching of sky lanterns in the County areas outside the incorporated cities and fire districts. This ordinance goes into effect in 30 days.

Are flying lanterns allowed in San Luis Obispo County? The answer is no.

A sky lantern, airborne paper lanterns sometimes called a “Chinese lantern,” is similar to a miniature hot air balloon; it is powered by a fuel cell or candle that heats the air, fills the balloon and makes the lantern fly up into the sky. But according to Chief Lewin “What seems harmless is not, and these lanterns pose a serious threat to the citizens, property, and wildland areas of San Luis Obispo County.”

Recognizing that the sky lanterns may have a necessary religious or cultural use, the ordinance allows an exception with approval from CAL FIRE. Even then the device must be monitored and tethered. If someone violates the ordinance the violator may be issued a misdemeanor ticket and be liable for fire suppression costs.

The sky lanterns have recently become very popular for weddings, events and memorials. These devices are easily purchased from local stores or on the internet.

A sky lantern was determined to be the cause of a wildfire that occurred in Shell Beach on the mountain above Pirates Cove last summer. This fire burned several acres, nearly destroyed vital emergency communication facilities and cellular phone towers. The Pirates Cove fire was extinguished within a few hours, but still cost tens of thousands of dollars to suppress. “Sky lanterns can travel significant distances causing costly fires, damaging property and potentially loss of life; this is a risk not worth taking” stated Chief Lewin.