Paso Robles News|Monday, July 6, 2020
You are here: Home » Region » SLO Film Festival celebrates the 35th anniversary of ‘Breaking Away’ with the film’s stars 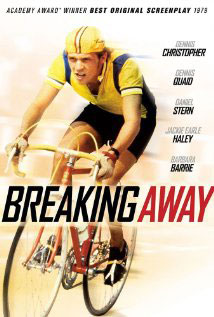 In honor of the San Luis Obispo International Film Festival’s 21st birthday next year, the SLOIFF will celebrate early by screening three classic movies with a “coming of age” theme this fall, with special events that include Hollywood celebrities and musical guests.

Sponsored by MidAmerican Solar, owner of Topaz Solar Farms, the series will begin in September and run through November, and is a fundraiser for the 2015 Festival which is scheduled for March 10th to 15th.

On Saturday, Oct. 25, the 1979 comedy, Breaking Away will screen at the Fremont Theatre at 7 p.m., with the film’s stars Dennis Christopher and Paul Dooley in attendance. Dennis Christopher was also the star of California Dreaming (screened in Avila Beach last summer), as well as having featured roles in Chariots of Fire and the Oscar-winning, Django Unchained. Paul Dooley, who plays the befuddled and hilarious father in Breaking Away, is a character actor also known for Sixteen Candles, Cars and as the guest star of many TV shows.

The critically acclaimed Breaking Away , directed by Peter Yates, won an Oscar in 1980 for Best Screenplay and a Golden Globe for Best Motion Picture Comedy. Dennis Christopher was nominated for several major awards that year, winning the BAFTA award for Most Promising Newcomer in a Leading Film Role, as well as the Young Artist Award for Best Juvenile Actor.

Christopher plays a small-town boy in the Midwest who is obsessed with the Italian bicycling team. His buddies, played by young Dennis Quaid, Daniel Stern and Jackie Earle Haley, don’t understand him and his father (Paul Dooley) thinks he’s out of his mind, but somehow his enthusiasm winds up inspiring not only his friends, but his entire town. The film celebrates its 35th anniversary this year and is a timeless classic that ranks high on many lists. It’s #8 on AFI’s 100 Most Inspiring Movies of All Time and #8 on Sports Illustrated list of Top 50 Best Sports Movies.

This film event is sponsored by Best Bike Zone, Flanders Bicycle, Paso Bike Tours, Foothill Cyclery, Mama’s Meatball and Peloton Cellars! Partial proceeds will go to support the SLO County Bicycle Coalition whose mission is to improve the quality of life in SLO County through bicycle advocacy, education and inspiration.

Dennis Christopher and Paul Dooley will do a Q&A after the movie and will also be at a meet-and-greet reception at Mama’s Meatball in San Luis Obispo, happening 5:00-6:30pm. The reception includes classic Italian appetizers, wine courtesy of Peloton Cellars, and of course, some Cinzano! Tickets for the reception AND movie are $30/person. Individual reception tickets are $20. Tickets for the film are $12 (general), $10 (students) in advance, $15/$13 at the box office day of show. Tickets are available at slofilmfest.org or (805) 546-3456.