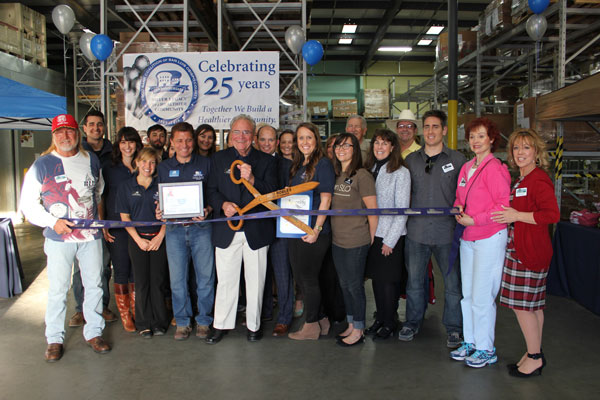 The Food Bank Coalition of San Luis Obispo County celebrated its 25th anniversary on Tuesday. The Food Bank was founded in 1989. Today it distributes more than six million pounds of food every year to the hungry.

Local residents and supporters turned out for a celebration Tuesday at the Food Bank’s warehouse, located at 2212 Golden Hill Road. The food bank helps 45,000 people at the low income or poverty level. Of those served, 40-percent are children and 20-percent are seniors. Every day they make choices between food, medicine and gasoline as they don’t have the money for all they need, he said.

Despite the stereotypes, most recipients of the food bank are working jobs, but most at low pay without benefits, said SLO Food Bank CEO Carl Hanson at a recent public speech. The vast majority of recipients are working families, some come from homes where two people work and some have two jobs, he said.

The food bank accepts donated food and makes purchases of non-perishable food at cost and delivers it to 75 local agencies like Loaves and Fishes for a service fee of 14 cents per pound. “The food is actually free to them and paid for by our donations,” Hanson said. Additionally, the food bank has volunteer gleaners who gather perishable produce for distribution. He said 700 volunteers help glean fresh produce from local fields, farms and fruit trees.

Funding for the food bank comes from local donations, about 55-percent, government sources like the USDA, about 25-percent, grants and service fees make up the rest.

Festivities take place from 3:00-5:00 p.m. The public will have a chance to learn more about the Food Bank’s programs, as well as enjoy games, giveaways, refreshments, and birthday cake.