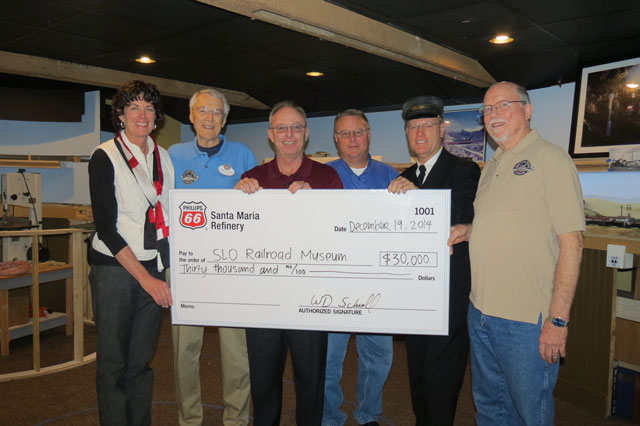 Christmas and trains just go together: think toy trains circling under Christmas trees, the arrival scene in “White Christmas,” and children’s movie classics like “Polar Express.” So what better time than just days before Christmas for the San Luis Obispo Railroad Museum to announce the gift of a major contribution by the Phillips 66 Santa Maria Refinery?

On Friday, Dec. 19, volunteers from the San Luis Obispo Railroad Museum received a $30,000 contribution from refinery officials. The museum was recently notified that its grant request to the Phillips 66 Corporation had been accepted and was being fully funded to the $30,000 amount.

The funds are earmarked to help complete the museum’s ambitious model railroad room, a scale model depiction of the rail industry in SLO as it looked in the early part of the 20th century. Scale model trains wind their way through Central Coast towns with local landmarks and topography captured in painstaking detail. The balance of the funds will support the museum’s educational exhibit showcasing the relationship between the oil industry and the railroad in SLO County.

According to Museum volunteer Arnold Jonas, the group hosted a tour of its facility for Phillips 66 officials in late fall and received a positive reaction. “Several of the people touring our museum were from out of state and were frankly amazed at what our group of volunteers has accomplished,” said Jonas. “And not only was the group impressed by the museum, they were intrigued by our emphasis on education and our interest in telling the story of the railroad in our county. Apparently that paved the way for our grant approval,” he said.

“All of us involved in the oil industry are aware of the role the local railroad played – and continues to play – in keeping our product moving,” said Bill Schroll, manager of the Phillips 66 Santa Maria Refinery located on the Nipomo Mesa. “We are delighted to help educate residents and areas visitors about the rich history of the railroads and their role on the Central Coast, including the dynamic partnership that continues between our industries,” he said.

The SLO Railroad Museum, located at 1940 Santa Barbara Street, just south of the SLO Amtrak station, is currently decorated for the holidays and includes a festive Lionel train in operation. The museum will be open for special holiday hours Dec.20 and 27 from 10 a.m. to 4 p.m. and welcomes visitors of all ages.

About the SLO Railroad Museum

The San Luis Obispo Railroad Museum is a regional non-profit educational institution founded to preserve and present the railroad history of California and specifically the Central Coast. Collecting, restoring and displaying relevant railroad artifacts, photographs and documents is its goal. This effort is supplemented by creating models, displays and graphics as well as operating historic railroad equipment to facilitate a better understanding of how railroads have affected our area’s social, cultural and economic history. 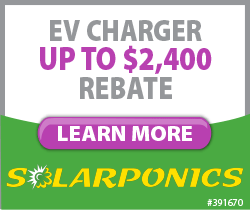