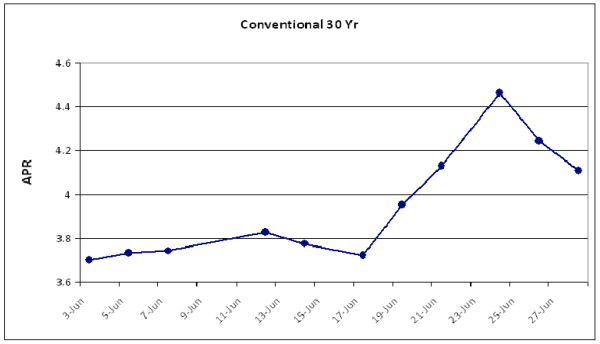 On May 2, 2013, the national average of the 30-year mortgage rate was 3.35% according to a Freddie Mac survey, which was just 0.04% away from its record-low reading of 3.31%.  Two months later, the 30-year fixed average has leapt to 4.46%, a rise in cost that significantly impacts the real estate market recovery.

In Paso Robles, home sales have accelerated through 2013 and home values are on the rise, but much higher mortgage rates could impede further progress.

“As inventory rises along with rates, there will be a strong resistance to increasing home prices and overall demand,” said Will Barnaby, a loan officer for Central Coast-based mortgage brokerage Central Coast Lending.

Rates had already been trending upward through the months of May and June, but trading in the wake of the Federal Open Market Committee (FOMC) meeting on June 18 and 19 influenced another sharp spike.

The FOMC voted 10-2 to continue the Federal Reserve’s quantitative easing program of $85 billion in monthly bond purchases, noting that the economic recovery remained slow in several sectors.  The renewal came as no surprise. The primary question for financial markets concerned how long the policy would continue.

While fielding questions from reporters about the extension, Bernanke acknowledged that the Federal Reserve would “taper”, or reduce, the quantitative easing program as the economy continues to improve. Though Bernanke didn’t give specifics, the markets seem to expect the improvement threshold to be reached by the end of 2013.

The bond market plummeted after the announcement. Federal Reserve involvement in the bond market provides a large source of demand that has kept prices high and yields low, and mortgage rates are pushed downward in such an environment.

The suggestion that the Fed could taper quantitative easing caused traders to scramble out of the market, so as to avoid holding expensive bonds with low yields.  In the days that followed, the 30-year fixed rose from 3.625% to 4.250%. Central Coast Lending estimates that in dollar values, the rate hike resulted in an average monthly mortgage payment increase of $90 to $100 per month for those who had yet to lock in a rate.

The market interpretation of Bernanke’s response isn’t without its problems. Daniel Podesto, co-owner of Central Coast Lending, believes there is a “huge disconnect” between Fed policy, the Bernanke press conference, and the reaction in the stock and bond markets.  Podesto predicts that mortgage will settle back as the market corrects itself, although the period of record low rates seems to be over.

The rise in mortgage rates puts a hitch in the Central Coast real estate market recovery.

Fueled by high demand and low supply, the Paso Robles the median sales price for a single-family home was up 33% in May 2013 from May 2012. Higher rates will reduce the pool of eligible buyers, and could damper the same demand that has led to the market boom.

“While the rising interest rates have undoubtedly reduced affordability for many people, the lack of inventory seems to be the more severe problem at the moment,” said Barnaby, who lives and works in of Paso Robles. Barnaby expects that in the short term, higher rates won’t outwardly appear on purchase or home price statistics, and that mortgage rates continue to swing up and down.

The long-term is  a bit more worrisome, but as Barnaby points out, the rise in mortgage rates was inevitable as the housing market and the economy continued to improve.

At the current rates rates, the yield to investors is small and relatively unattractive, Barnaby explained. The upside of higher yields is that it will bring private money back into the Mortgage Backed Securities market, where greater demand will provide incentive for a looser lending environment.

Ultimately, Barnaby expects that the market will balance itself out, and the real estate market will proceed at a slower, measured pace.

Rylan Stewart is the marketing director forCentral Coast Lending. It is a family-owned mortgage brokerage based in the Central Coast of California with offices in Paso Robles, San Luis Obispo, Arroyo Grande, and Morro Bay. Track mortgage rates and the local real estate market on their website www.CentralCoastLending.com.