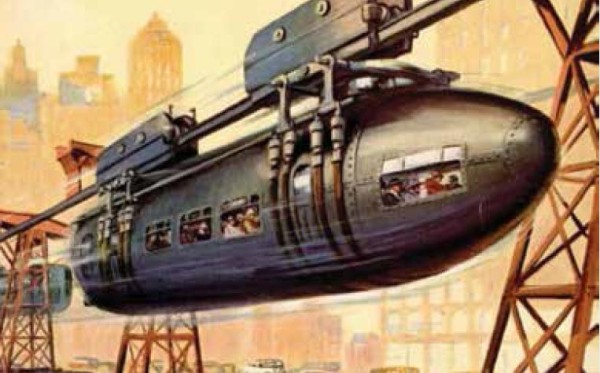 1909 plan for superfast transit from LA to SF

This week Elon Musk, the real life Tony Stark, owner of Tesla and Space X, announced a plan for a hyperloop transportation system that could connect passengers from Los Angeles to San Francisco in about 35 minutes. His game-changing concept was not the first. In 1909, there was a plan for one with a stop in Paso Robles.

In an alternate history that never came to be, inventor Fletcher E. Felts got a patent for the Elevated Suspended-Track Automotor-Railway, a “torpedo-shaped monorail … moving along an elevated track supported by steel towers that looked like Erector Set centurions guarding the empty space below.” Felts first imagined a line between Pasadena and Los Angeles: “The main route would have begun in Eagle Rock and proceeded through canyons in both Mount Washington and Elysian Park, terminating downtown.”

He said the monorail could run at speeds up to 100 mph and that total travel time between LA and Pas would be just eight minutes. But that was just the beginning–he wanted a line running from LA up to San Francisco, with speeds up to 150 mph: He planned a running time of three hours, 39 minutes.

Planned stops for the Automotor-Railway

An exhibit of incredible inventions never built is on display through October at the A+D ARCHITECTURE AND DESIGN MUSEUM in Los Angeles.