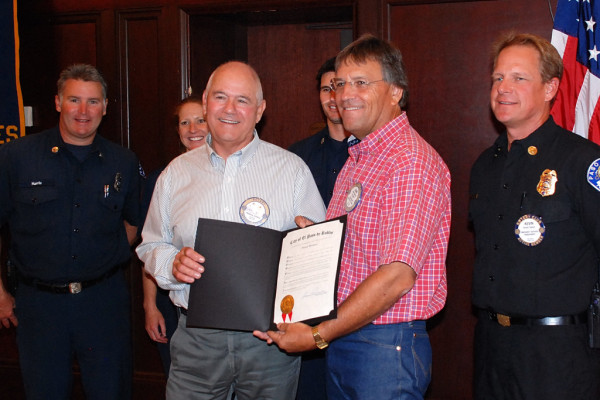 Mecham was honored for stopping to help at the scene of the fire, attempting to extinguishing the fire and for evacuating an elderly resident from his home. He put the safety of others above his own, said Councilman Hamon.

The presentation was a surprise to Mecham at the Paso Robles Rotary Club meeting at the Paso Robles Inn ballroom today at noon.  The Paso Robles Fire Department joined in by giving Mecham an honorary yellow firefighter’s hat labeled “SUP 1” in large lettering. Mecham came to speak to the club about the falling water basin.

On Aug. 2, Mecham was first on the scene and tried unsuccessfully to extinguish fire as it started in the garage of a tri-plex. The fire appeared to have started under a car in the carport, a witness said. The home’s occupant, an older gentleman, appeared to be OK, the witness said.