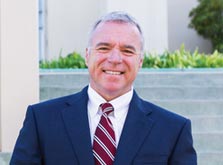 “As I’ve watched this campaign unfold,” Gibson said, “I’ve listened to both candidates and evaluated their actions. I’ve come to the conclusion that Mr. Covello possesses the experience and good judgment to make him a fine District Attorney. He has my support.”

Covello, who is the current Assistant District Attorney and is a 21-year veteran prosecutor, said he welcomes Gibson’s endorsement and appreciates his colleague’s backing.

“Bruce Gibson has been recognized as one of this county’s most knowledgeable elected officials,” Covello said. “It feels pretty good when someone of Bruce’s stature weighs in on an important campaign like this. I aim to make Bruce proud when I’m District Attorney.”

Covello’s campaign has picked up support from other high places as well.

According to the most recent campaign financial reports, 11 of the 12 sitting Superior Court judges in San Luis Obispo County have made financial contributions of $100 or more to the Covello campaign. None of the sitting judges have made reportable contributions to Covello’s opponent, Dan Dow.

“I’ve said throughout this campaign that actions speak louder than words,” Covello said. “This financial support from the sitting judges says a lot about who they think would make the best District Attorney.”