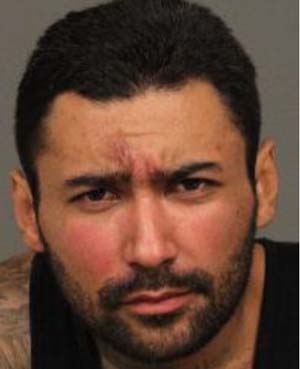 On Saturday at approximately 1:40 p.m. Paso Robles Police Department officers were dispatched to the area of the ATM at the Rabobank in the 800 block of Spring Street after receiving a report of an attempted armed robbery, according to a police report.

At approximately the same time, the police received reports of a suspicious subject in the 500 block of Spring Street. This subject and his vehicle matched the description of the suspect provided by the victim in the attempted armed robbery. This subject had reportedly broken out a window of a parked vehicle and also acted erratically inside a check cashing business before
leaving in his vehicle.

Based on descriptions of the suspect and vehicle provided by the victim and other reporting parties, the suspect was located by officers driving northbound on Spring Street at 10th Street. The vehicle was stopped on 12th Street and the suspect was detained without incident. A loaded handgun was located inside the vehicle, along with a controlled substance, police report. There were no other occupants in the vehicle.

The victim positively identified the suspect as the person who had attempted to rob her at gunpoint. This suspect was identified as 28-year-old Santa Maria resident Mario Alejandro Valenciavalencia. He was arrested without incident and later booked into the San Luis Obispo County Jail for the following charges: attempted armed robbery, false imprisonment, elder abuse, child endangerment, vandalism, carrying a loaded firearm in a vehicle, possession of a controlled substance, and possession of a controlled substance while in possession of a firearm.

Neither of the victims was injured during this event.