On Tuesday, members of the San Luis Obispo County Sheriff’s Narcotics Unit responded to a report of an explosion and fire at an apartment at 1351 Los Olivos Avenue in Los Osos. Initial reports said a toaster caught fire in the kitchen area and then spread to the cabinets. 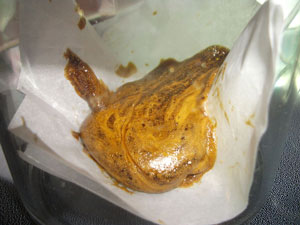 A man inside the apartment used a fire extinguisher to put out the fire and then drove himself to a local hospital with burns to his face and arms. He was later transported to the Fresno Burn Center. The man is identified as 32-year-old Matthew David Culver of Los Osos.

However, when investigators arrived on scene, they found evidence of a butane honey oil conversion lab, which converts marijuana into hash oil or “honey oil.” The extraction process uses parts of the marijuana plant and converts them to a more concentrated oil using butane gas in the process. This process is highly dangerous and can result in explosions like this one, according to a press release from the San Luis Obispo County Sheriff’s Office.

An elderly man who leases the apartment was also inside when the explosion and fire occurred. He was not injured in the incident but was taken to the hospital for heart related issues. He is not considered a suspect in this case.

Once Culver is released from the hospital, investigators plan to charge him with the manufacture of a controlled substance and elder abuse. There is no further information to be released at this time.