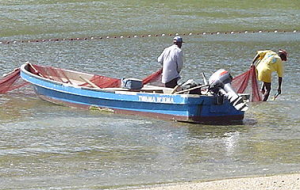 Example of a panga boat.

Example of a panga boat.

Update: 11-27-12, while on patrol, CHP officers came upon a man who was walking along Highway 1 just north of the old Piedras Blancas hotel. That is the same area where a beached panga boat was discovered earlier in the day. The man gave officers a false name and failed to provide proper identification.

Because of certain items found on the man, he is thought to be connected to the other suspects involved with the panga boat. 44-year-old Jose Lopez Lopez was booked into County Jail and is presently on an immigration hold.

The Sheriff’s Office would like to thank the CHP for their assistance with this arrest and also to the California Department of Fish and Game for their efforts to pull the panga boat from the beach when it was found.

At 4:15 a.m., while on patrol, two San Luis Obispo County Sheriff’s deputies discovered an open gate to a field north of the Piedras Blancas lighthouse off Highway One. When they arrived on scene, they discovered a beached panga boat along with five men.

The men took off on foot and the deputies gave chase. The deputies were able to capture one of the suspects. A scuffle ensued which resulted in one deputy receiving minor injuries. The other suspects were headed south on foot. A second suspect was apprehended about a mile away from the scene. A search for the other suspects involved Sheriff’s deputies, Sheriff’s K9 units, a CHP plane and a Coast Guard helicopter.

No narcotics were discovered on the panga boat but it is consistent with narcotic smuggling operations. Approximately 30 containers of fuel were floating in the water next to the boat. The boat is thought to be about 28 feet long with a single engine. The boat has been turned over to the Coast Guard.